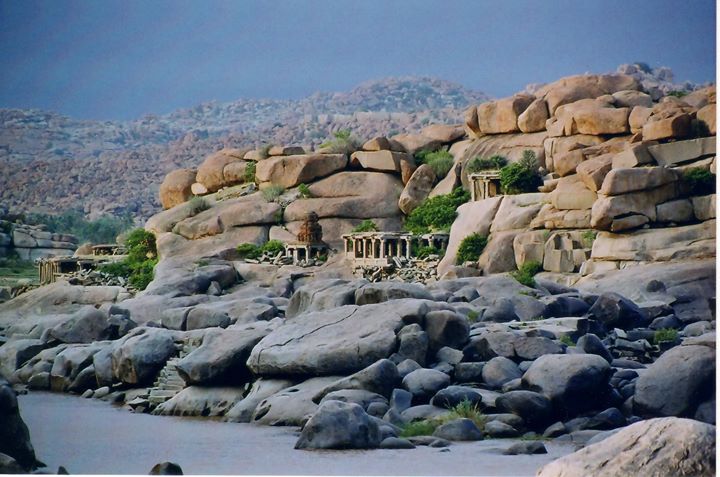 The most exhaustive work ever undertaken on Vijayanagara yet:

“The city is such that the pupil of the eye has never seen a place like it, and ear of intelligence has never been informed that existed anything to equal it in the World.”
- Abdul Razaak, 1443

Vijayanagara, the “City of Victory,” was the greatest of all Hindu capitals of South India. Its impressive ruins in central Karnataka are known best as Hampi, after the name of a local village. Since 1980 an international group of researchers has been documenting and interpreting the remains of Vijayanagara. The following pages describe Vijayanagara Research Project's (VRP) investigations and interpretations, while also offering essential background information on the history of the city and the empire of which it was the capital, the urban layout of the site, and the variety of its military, ceremonial, civic and religious architecture.

In recognition of the significance of Vijayanagara, the “Hampi Group of Monuments” was inscribed on UNESCO’s World Heritage List in 1987. However, this gesture has not removed the dangers that the site now faces from unchecked development and the lack of an effective conservation management plan.

Under the direction of Drs John M. Fritz and George Michell, authors of this web site, extensive documentation of the Vijayanagara site was carried out from 1980 through 2002. During this period much of the core area of Vijayanagara (more than 25 square km of ruins) was mapped in detail and more than 34,000 archaeological features were located and described. Some 1,000 structures, ranging from large-scale, comparatively well preserved temple complexes to dilapidated and collapsed structures, were measured and drawn. Photography played a large role in this documentation effort. So, too, did translations of texts in vernacular languages, which we believe will contribute to future interpretations of the archaeological record. Ethno-archaeological investigations by individual Project participants added a contemporary dimension to our fieldwork. These documentary techniques have helped us to understand a variety of archaeological features ranging from civic and religious structures to sculpture and even game boards. For more on this topic link to Fritz 2006, ''History of Documentation'' - http://bit.ly/1PhNt2a

Yes, Dr Mitchell's research on the region is amazing. A comparison of the Marg magazine of 1981 from where it all began to his latest book on Hampi , published by Jaico, showcases the learnings. This entire series of new books by Jaico, is really outstanding. ( http://jaicobooks.com/j/j_gen.asp?Category=Art+and+Architecture+⊂_category= )

Dr John M. Fritz, Archaeologist, USA (1981 to present-day). He is currently Consulting Scholar, University of Pennsylvania Museum of Anthropology and Archaeology. He was educated at the University of Chicago where he received his PhD in Anthropology in 1974. He taught at the University of California, Santa Cruz and the State University of New York, Binghamton. Subsequently he was adjunct faculty at the University of New Mexico and University of Pennsylvania. His earlier work was concerned with hunting/gathering subsistence systems and with the typology of stone tools in the prehistoric US Southwest. He then became interested in the relation of settlement plan and world view in Chaco Canyon, New Mexico. He began fieldwork at Vijayanagara in 1981. Here, he has concentrated on “surface archaeology” (documentation of evidence for past human activity visible on the surface of the site) and on the interpretation of urban form. Contact: johnmfritz@gmail.com

Dr George Michell, Architecture Historian, UK (1980 to the present day) was born in Australia where he received a Bachelor of Architecture degree from the University of Melbourne in 1968. He then turned his attention to India, obtaining his PhD in 1974 from the School of Oriental African Studies, University of London, for his dissertation on Early Chalukya temple architecture. In the 1970s he directed courses on Asian architecture at the Architectural Association, London, as well as co-editing Art and Archaeology Research Papers (AARP), a journal specialising in architecture and art of the Islamic and Indian worlds. His research has mainly concentrated on the Deccan, Bengal, Gujarat and, most recently, Southern India. The projects have varied from surveys of town planning and Islamic buildings to detailed studies of temple architecture and sculpture. During the 1980s and 1990s he and Dr John M. Fritz co-directed an extensive survey of the medieval Hindu site of Hampi-Vijayanagara in Karnataka. In 1988-89 he was visiting Rockefeller Research Fellow at the Arthur M. Sackler Gallery of Asian Art in Washington. He has lectured at universities and museums throughout the USA, Europe, India and Australia. He has also acted as a guest curator for In the Image of Man: 5,000 Years of Indian Art, Hayward Gallery, London, 1982, and Living Wood: Sculptural Traditions of Southern India, Whitechapel Art Gallery, London, 1992. His many publications include The Hindu Temple: An Introduction to its Meaning and Forms (1977; Reprinted, University of Chicago Press, 1989), Brick Temples of Bengal (Princeton University Press, 1982), Blue Guide to Southern India (A&C Black, London, 1997), The Royal Palaces of Rajasthan (Thames & Hudson, London, 2003), Mughal Style (IBH, India, 2007), Kashgar – Oasis City on China’s Old Sild Road (Frances Lincoln, London, 2008), Mughal Architecture and Gardens (The Shoestring Publishers, Mumbai, 2011) and several works on Vijayanagara. (See Project Publications). Since 2002 he has been Professorial Fellow at the Department of Architecture, University of Melbourne. He received the Nadoja award (Honorary Doctor of Letters), from Kannada University, Kamalapura, Karnataka. In January 2012 he was appointed as a Member in the General Division of the Order of Australia, In March 2013 he was awarded an Honorary Doctorate by the University of Melbourne. Contact: georgemichell@aol.com

Thanks RBSI .wonderful info.Would be glad if you would also share some details on the research works of Dr.Robert sewell,one of the foremost & eminent authorities on vijay nagar empire

Hampi is known for best wooden sculptures and rightly quoted by Razzak. Thnx to Dr George to remove the dusts on vijaynagar period .

Great you allow shared such interesting that information on Vijayanagar empire and those researching it!

In India people are so foolish that they don't understand the value of Heritage sites, Like Junglees they disfigured it, or they will start constructions, mining or starts making huts . no doubt that Vijaynagaram and Humpy sites are left out. Vijaynagaram and Humpy were most prosperous cities once up on a time! King Vijay dev raya made it well planned and artistic .Vijaynagaram monuments are today standing but God knows for how long! Sense to protect History will come in to the brain of Indians when all Monuments we have to see in Photographs in musiums of other countries.

There is a . book the . forgotten empire written much earlier to 1980 we have been to AIHOLE PATTADICAL BADAMI ALSO VENDALS ARE OPERATING. LOCALS DON'T CARE FOR THE HERITAGE AIHOLE PATTADICAL WERE NURSERIES OF HINDU TEMPLES DRAVIDA NAGARA AND ANCIENT STYLE 3 KINDS OF TEMPLES R.AVAILABLE .SAD NOT MANY EDUCATED PEOPLE KNOW ABOUT THESE IN NORTHERN INDIA LOST IN DIRTY POLITICAL DRAMAS SO IS SOUTH. COASTAL TAMILNADU TANJORE KUMBHAKONAM HAVE CLUSTERS OF TEMPLES .ONE CAN SPEND WEEKS VISITING APPRECIATING THE BEAUTY OF THESE TEMPLES

Very nice where this place

Thanks for your incredible works ,

I invite my very close friend Krishna Devaraya the dcion of the Vijayanagar Empire to view this article.

Thank U very much for this Awesome written Post.

Tu bhi to indean he budhdho

Very nice pic. & details given. I like this Heritage place.

A stunning place. One day I will go back.

Indian self respect has been severely undermined by ruthless trampling by alien cultures , hence we are so apathetic to our own rich heritages. Has fall of the last mighty Hindu bastion , left some lessons for future generations ?

Thanks. Very recently visited hampi. Marvelous carvings. Whatever they want to communicate , they made it through stone carvings.kudos

Hampi., the cradle of Vijayangar Empire is in Karnataka state ., south India. It's Very near to Ballari/ Hospet towns. Connected by Rail/Road from Bangalore.( about 250kms) .

Thanks RBSI for the links

The best way is to rebuild whole vijaynagar, irrespective of time money

Thanks! I read the article late night was going tag you in morning but you found it

One of the most awesome places ever Hampi!

Thanks for such nice information.

Thanks For This Work

And see how it is kept today

What is the cost of this book?

There was another foreigner Russian by name Afanasi Nikitin on whose visit a Hindi film Pardesi starring Nargis, Balraj Sahni& Prithviraj Kapoor came up in 1958.

Jawaharlal Nehru wrote quite a bit about Vijayanagara empire in Glimpses of World History.

Shailendrasinhji L Zala you are an idiot to the core

Good morning Dr. Sir. Your nephew Mahesh made our day and stay in Koillpatti

Most memorable and we enjoyed the place the people and the programme and above all the hospitality if the college authorities and staff alike. Thanks once again. If I err please correct. You're our teacher.

Even though my comment seemed out of place I wanted to place in record. This extensive study about Vijiayanagara is an interesting one

Thanks for sharing the link to jaicobooks

History never repeats,TELUGU DIASPORA people should and must know about KRISHNA DEVA RAYA who helped telugu literature and telugu people to establish in down south ( NAIK KINGS OF MADURAI,THANJAVUR AND TRICHY) though kannadiga by birth,great to see big people for re exploring HAMPI for making as one of the best HERITAGE center which keeps the great soul of KRISHNA DEVA RAYA happy and also telugy- kannada diaspora people happy.

Just to add glitter to his book.as tho he had any value for our culture