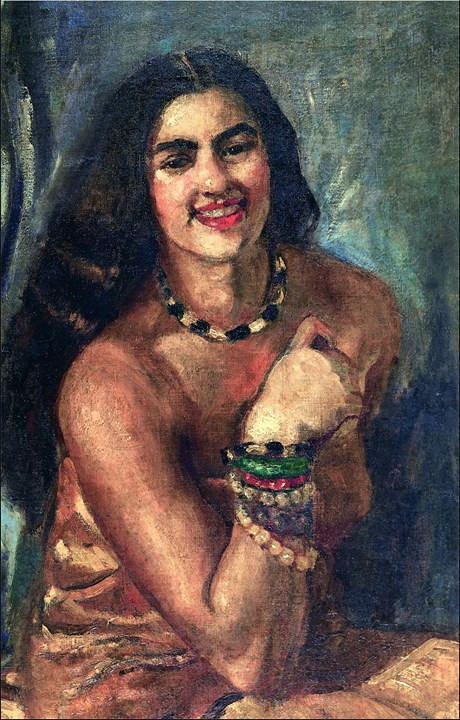 A self-portrait by the artist has sold for $2.92 million in Sotheby’s New York auction, setting a new record for an Indian woman artist.

A rare self-portrait by Amrita Sher-Gil has sold for $2.92 million in Sotheby’s New York auction, setting a new record for an Indian woman artist.

Sher-Gil’s oil-on-canvas masterpiece fetched the highest total $2,920,000, well over the $1.2-$1.8 million estimate for a South Asian Art sale at Sotheby’s since 2007, auctioneers said in a statement today.

Born in Budapest to an Indian Sikh father and Hungarian mother, Sher-Gil painted the portrait in 1932 when she was 19.

It is one of the very few of her canvases that are in private circulation outside India, where her work is among those declared “National Art Treasures” by government and cannot be taken out of the country.

Auctioneers said the Modern and Contemporary South Asian Art sale brought in $10,589,000, the highest total for a Sotheby’s sale in the category since 2007 and a 60 per cent increase on the equivalent sale last season, a result that was largely driven by the entry of several major new collectors into the market.

“The appearance at auction of a work by Amrita Sher-Gil is a historic event and so it is fitting that it led our best sale result in a decade,” she said. Priyanka Mathew, Head of Sales of Modern and Contemporary South Asian Art at Sotheby’s New York added, “The price is a record for both the artist and also for any Indian female painter. The spirited bidding on the ‘Self-Portrait’ came from three continents and lasted over ten minutes to result in a landmark price,” she said.

At the same auction a Rabindranath Tagore self untitled portrait went to a European private buyer for $225,000. An oil-on-canvas by V S Gaitonde fetched $2,290,000, followed by an untitled work by Jagdish Swaminathan from his bird tree and mountain series, which went under the hammer for $2,290,000.

“The group of Rabindranath Tagore drawings, which have been in the same private collection since being purchased from artist, was a further highlight and yet again demonstrated that collectors will extend well over high estimate for well-priced works that have not appeared previously at auction,” Ms. Mehta said.

In the late 19th and early 20th, the art schools set up by the British government imparted instruction that was neither related to our past nor to contemporary European art that burgeoned with the spirit of new experiments; the emphasis was solely on outdated academics. There were two dominant schools of painting in India at that time - Bengal school were turning out ancient Indian styles imitation and the Bombay School of Art mainly engaged in poor imitations of western styles. At such a critical period of transition, a powerful personality was needed to show the light to painters groping in the dark. ASG brought in a powerful expression and remained a torchbearer for other artists of her time.

Splendid , magnificent: sumptuous in appearance, in self portrait

During her Lahore days