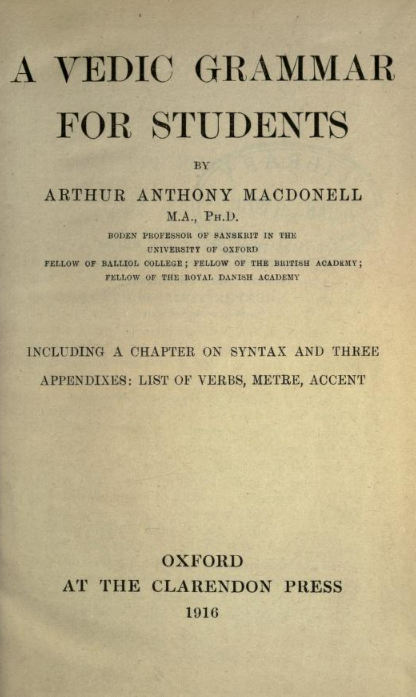 A practical Vedic grammar has long been a desideratum. It is one of the chief aids to the study of the hymns of the Veda called for forty-three years ago in the preface to his edition of the Rigveda by Max Mueller, who adds, ' I doubt not that the time will come when no one in India will call himself a Sanskrit scholar who cannot construe the hymns of the ancient Rishis of his country'. It is mainly due to the lack of such a work that the study of Vedic literature, despite its great linguistic and religious importance, has never taken its proper place by the side of the study of Classical Sanskrit either in England or India. Whitney's excellent Sanskrit Grammar, indeed, treats the earlier language in its historical connexion with the later, but for this very reason students are, as I have often been assured, unable to acquire from it a clear knowledge of either the one or the other, because beginners cannot keep the two dialects apart in the process of learning. Till the publication of my large Vedic Grammar in 1910, no single work comprehensively presented the early language by itself. That work is, however, too extensive and detailed for the needs of the student, being intended rather as a book of reference for the scholar. Hence I have often been urged to bring out a short practical grammar which would do for the Vedic language what my Sanskrit Grammar for Beginners does for the Classical language. In the second edition (1911) of the latter work I therefore pledged myself to meet this demand as soon as I could. The present volume redeems that pledge.