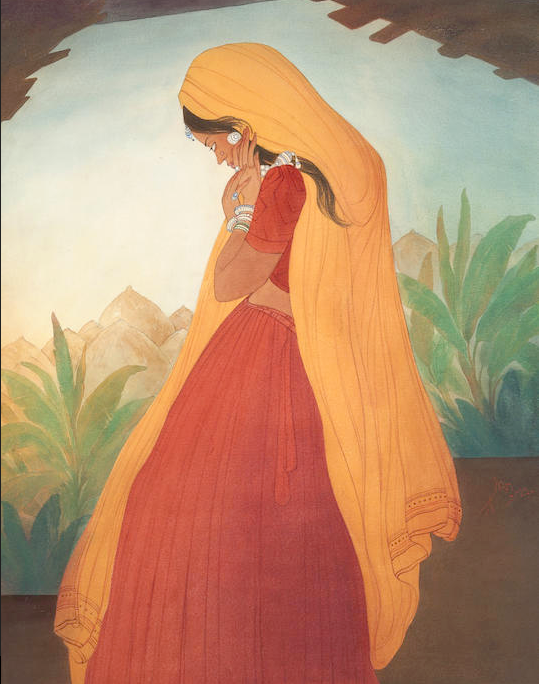 Chughtai believed that it was the duty of the artist to rise above prejudice in the creation of an art that celebrates inclusive and universal tradition. According to him, only by recognizing a universal tradition can one develop an innate artistic identity. As such the artist chose to paint Mughal, Iranian, Hindu, Punjabi, Kashmiri and Brahman subjects and later expanded to incorporate a 'pan-Persianism'. The tendency to group him together with the Bengal school of painters was contested by the artist, who stated that contrary to Bengal art, which "favoured gods and goddesses and was full of pessimism and gloom...his art was radically different because it inculcated hope and faith in life." - Akbar Naqvi, Image and Identity: Fifty years of Painting and Sculpture in Pakistan, Karachi, 1998, p. 51 & 54.

Defined as the hasrat stare, meaning "the desire to have", this painting is from a series exploring adolescence and coming of age. The young maiden holds her jewelry, of Swati and Afghan origin, to her shoulder so as not to irritate her sensitive growing breasts. Preoccupied with puberty and its forces upon her, from the wooden shed of a vegetable field, she gazes at the roofline of distant huts and notices their similarity to full grown breasts. Bonhams is grateful to the artist's son, Arif Rahman Chugtai for assistance in the interpretation of this scene.

Such a great artist.

It is a beautiful