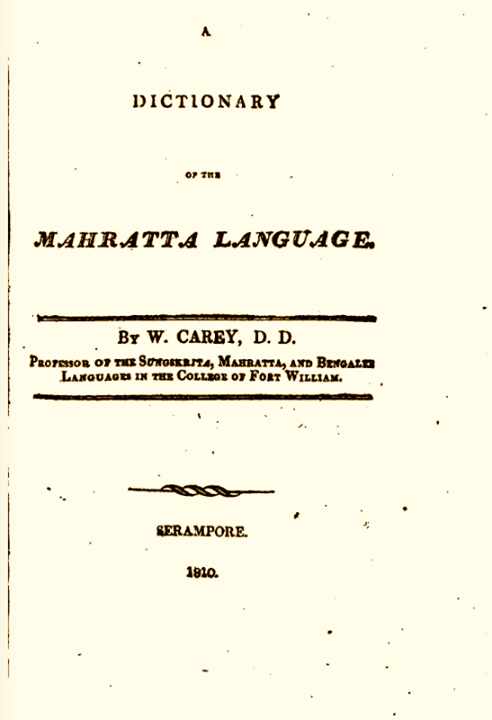 Digital Rare Book:
A Dictionary of the Mahratta Language
By W.Carey
Published in Serampore - 1810

William Carey (17 August 1761 – 9 June 1834) was a British missionary, a Particular Baptist minister, a translator and an activist. He also opened the first University in (Serampore) India offering degrees.

He is known as the "father of modern missions."

His essay, An Enquiry into the Obligations of Christians to Use Means for the Conversion of the Heathens, led to the founding of the Baptist Missionary Society.He went to Kolkata (India) in 1793, but was forced to leave the British Indian territory by non-Baptist missionaries.He joined the Baptist missionaries in the Danish colony of Frederiksnagar in India (Serampore), and there he lived with people ravaged by extreme poverty and diseases.He translated the Bible into Bengali, Oriya, Assamese, Arabic, Hindi and Sanskrit.

William Carey has been called a social reformer and illustrious Christian missionary,as well as a colonial ideologue with prejudice, hyperbole and concealed racism.

Sir, I enjoy this Page immensely...and share the wealth of information that you share... everything from artwork to books. I sure hope that I am mistaken... pl. permit me. Why do you say FIRST University? You don't regard the Universities at Nalanda and Takshashila as places of high learning that many centuries earlier hosted many foreigners as well? And, yes, they did confer formal degrees on their graduating scholars.

Rajyashree Tripathi: I entirely agree with you. What has been posted above is but an extract from the Wiki article, which I have refrained from editing.