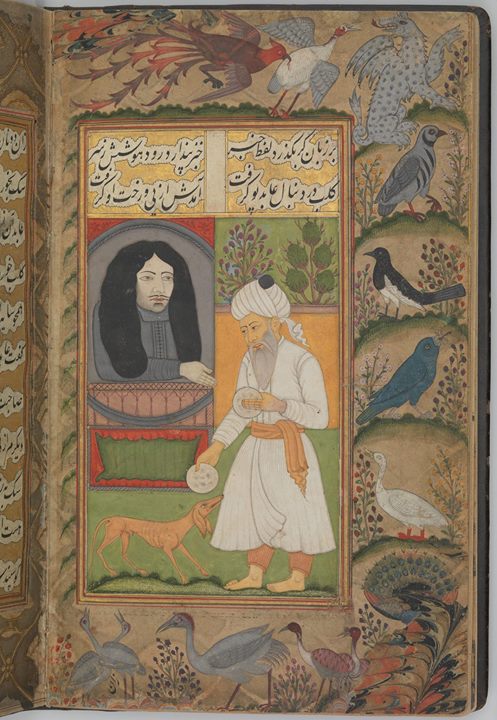 The text of this book is a series of moralizing poems on the merits of the ascetic life, three of which are illustrated. The painting illustrates the parable of a recluse who accepts bread from an infidel (depicted here as the English monarch Charles II) and is chided by a dog. The beautiful birds in the margin of the page compete for attention with the witty illustration.

Other paintings include one which accompanies a poem on the regrets of a life spent learning useless information; the artist has shown a school where only the sciences are taught, its teachers dozing, meditating and drinking.

Another painting accompanies a poem valorizing patience—a recluse, shown praying in the wilderness, does not receive his customary daily bread; when he accepts food offered by an infidel, he is scolded by a dog for not having waiting for God to provide.
A final image accompanies a poem about hypocrisy—it shows the widow Bibi Tamiz praying, although she is known to be a prostitute.

Deep roots of hate against people of different religion, sciences and women.

Is that Charles the first on the cover?