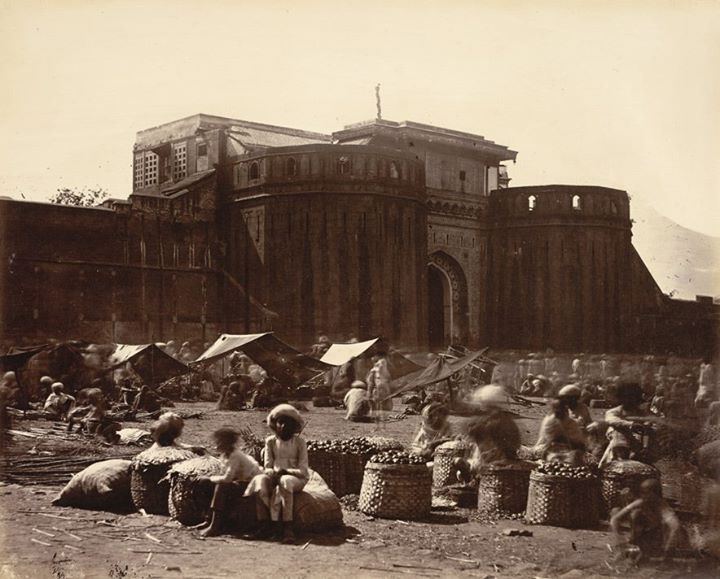 Photograph of the Peshwa's Palace in Pune (Poona) - 1860, Maharashtra, by an unknown photographer, from an album of 40 prints taken in the 1860s. In the centre of the old city of Pune, the imposing walls of the Shaniwarwada palace is all that is left of the royal residence of the Peshwas. The palace, founded by Peshwa Baji Rao I in the 1730s, was burnt down in unclear circumstances in 1827. Pune was the capital of the powerful state of the Marathas from the 16th century. The Brahmin Peshwas were the Prime Ministers of the Maratha rulers but the post was hereditary and power passed to the Peshwa family who controlled Pune from the 18th century until the arrival of the British. The view looks towards the entrance gatehouse and outer walls of the palace, with a vegetable market on the open space in the foreground.

Famous Indian General who served as Peshwa (Prime Minister) to the fourth Maratha Chhatrapati (Emperor) Shahu from 1720 until Bajirao's death.

Shaniwar Wada The influence of Moghul design and the hallmark of the Maratha craftsmanship, a timeless masterpiece, Shaniwar Wada in all its glory and moments of its eventful existence.Though all that's left are ruins, Shaniwar Wada is definitely not dead. Somewhere amongst the rubble, Shaniwar Wada still breathes. The twenty-one feet tall main door, Delhi Darwaza remains unshaken, unbattered and unaffected. Facing North, arbitarily towards Delhi, the seat of power wearing an armour of heavy metal spikes is a picture of strength. And has still stood its ground. But inside all that remians is a skeleton of what had once been the seat of power. The birth of Shaniwar Wada as concieved by Bajirao Peshwa-I, was a double storeyed structure with two square courtyards on each side. Though bearing the countenace of a fort, Shaniwar Wada as we see it was not how it was built. The passage of time and seven Peshwas later moulded and remoulded structured and restructured to what it is today. At the zenith of its glory, sixty years later Shaniwar Wada assumed the form of a intricately assembled five storeyed structure, an archtectural marvel. The end was surprisingly sudden as the raging flames of fire crumbled it to dust…. The construction of Shaniwar Wada began on the 10th of January, 1730 when Bajirao Peshwa -I, collected a handful of mud from the nearby Lal Mahal and laid the foundation. With teak from the jungles of Junnar, stones from the quarries of Chinchwad and lime belts of Jejuri provided the lime, the main Moghul influence came from the forays to the north by Bajirao-I which is obvious from the shape and the structure of the arches. Work progressed unhindered till finally on the 22nd January 1732. Built with a princely sum Shanivar Wada interiorsof sixteen thousand one hundred and ten rupees, this symbol of the Peshwa was an exercise of extravagance… Interestingly, the parapet was not a part of the original plan. Towering an amazing twenty-one feet above the ground, the nine hundred and fifty feet long wall provided a shield interrupted by five massive doors and enclosing nine ramparts within its length. Mentioning his romance in the pages of eternity , the Bajirao Peshwa-I, facing the north , the door was named Mastani Darwaza.In those days of political instability wherein the hunger for power was unquenchable, the security of Shaniwar Wada assumed a new dimension. There were two hundred and seventy-five towers guarding it where each night were fifteen to twenty soldiers. In all, there were an astounding three thousand one hundred and forty-four guards who ensured fool proof security of the entire wada. The residential quarters were carved of suru wood. Discreetly defined, a splash of colours, and spectrum of intricate carvings gave it a spellbinding look. The walls have pictures from Ramayan and Mahabharat done by the famous painter Bhajiraj. The wooden archways have exquisite glass chandeliers hanging from them while the highly polished marble mosaic with rich persian rugs made Shaniwar Wada a dream palace of living. A tribute to his love, some historians believe that Mastani Mahal was built adjacent to his Mahal and was even supposed to have excelled Mastani's beauty. And Shaniwar Wada was supposed to be privy to their rendezvous. The constructional splendour of Mastani Mahal was renowned to have been poetry in stone.Nana Saheb Peshwa in 1752 after taking over the empire gave Shaniwar Wada its own personal touch in the form of Ganesh Durwaza and Ganpati Rangmahal where he held an audience with the people of Pune. Though it also became a symbol of subjugation with the Union Jack fluttering on its top. While the fires ravaged Shaniwar Wada and assaulted its splendid structure, its walls still hide old intrigues, buried treasures, power games and love stories of a bygone era... Source: http://bit.ly/1kPLWXX

It is so beautiful to see villagers who actually lived during the time of Peshwa, sitting with vegetable baskets outside. They are so lucky people, who saw different kind of world!!

A wonderful read ! Thanks for sharing !

Bajirao the powerhouse ... brigade has some new story regarding Shaniwarwada as their historian Kokate nd Khedekar had lived for more than 300 years.