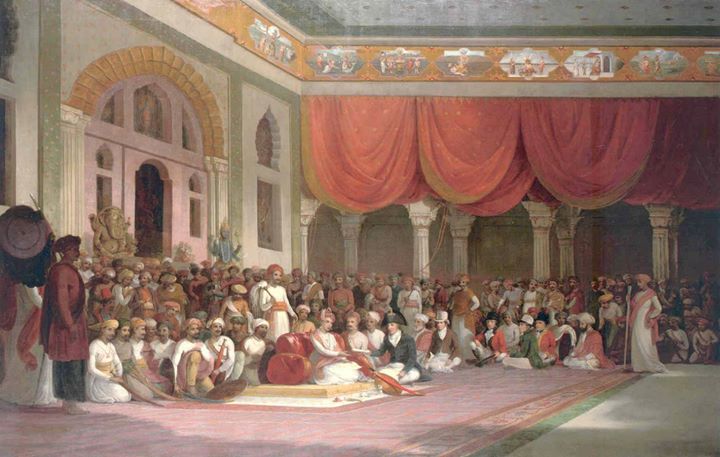 Sir Charles Warre Malet, Concluding a Treaty in 1790 in Durbar with the Peshwa of the Maratha Empire
by Thomas Daniell

I have several of his aquatints frim the same period.

Aquatint published by R. Cribb in 1807 and part of King George III's Topographical Collection. View of the court of the young Maratha ruler, the Peshwa Sawai Madhavrao, who is sitting on a cushion throne in the Durbar Hall of the Shaniwarwada Palace at Poona (Pune). Sawai Madhavrao (b.1774-d.1795) is wearing a typical Maratha turban which has a jewelled sarpesh (an ornament worn by rulers on their turban). The person in European costume is Sir Charles Warre Malet (1752-1815) of the East India Company, who in 1785 was made British Resident at the Court of the Peshwa in Poona. Here he has just concluded an alliance with the Marathas against Tipu Sultan, which was signed on 6th August in 1790. The 17th and the 18th centuries saw the rise of the Maratha chieftains of the Deccan. The Peshwas were originally ministers of the Maratha rulers, but the position became hereditary and they began to wield the power, with their seat in Poona. The Shaniwarwada Palace, built in about 1736, was burned down under unknown circumstances in 1827. Only its outer walls and main entrance gate remain. Text and image credit: Copyright © The British Library Board