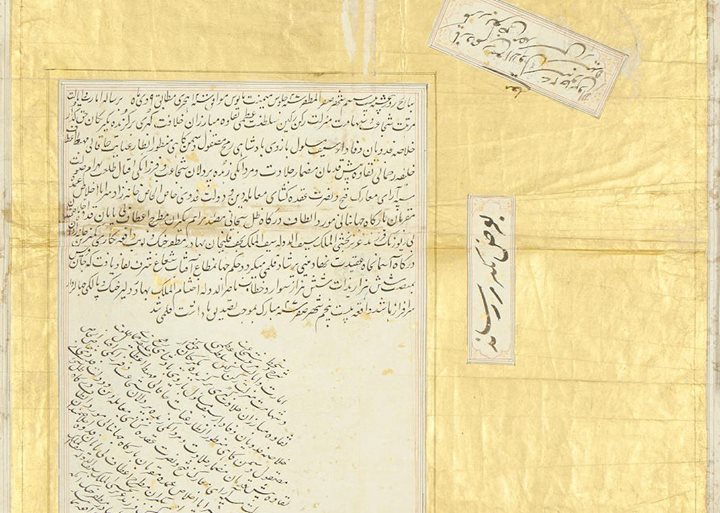 Digital Rare Book:
The origin and authentic narrative of the present Maratta War; and also, the late Rohilla War, in 1773 and 1774 ... To which is added the unaccountable proceedings in the military store-keeper's office, in Bengal.
Printed for J.Almon and J.Debrett, London - 1781

Image:
ANGLO-MARATHA WAR
Letter signed from an unidentified Indian Ruler to "Your Majesty", discussing the provision of troops towards the English cause, in English, on one yellow sheet (folded) with decorative border printed in gilt and overprinted with all-over design of , signed, and with official stamp, 500 x 285mm., January 1783.

FOOTNOTES:
"... I put myself under the shelter of your Royal wings... being now seven years past I acknowledge the English India Army is fit for Battle but insufficient through ignorance to the Marrata's army... [then offers to supply] 10,000 foot and artillery with the necessary provision for battle...", but questioning that "I'm allowed only 10,000 rupees monthly for all my charges... [which] proves insufficient. Therefore I crave your Mjesty may tend towards directing its increase somewhat...", adding that "... the enemey are even making various proposals and offers". Further on Lord Shelburne and Edmund Burke are mentioned in relation to a history of the wars so far.