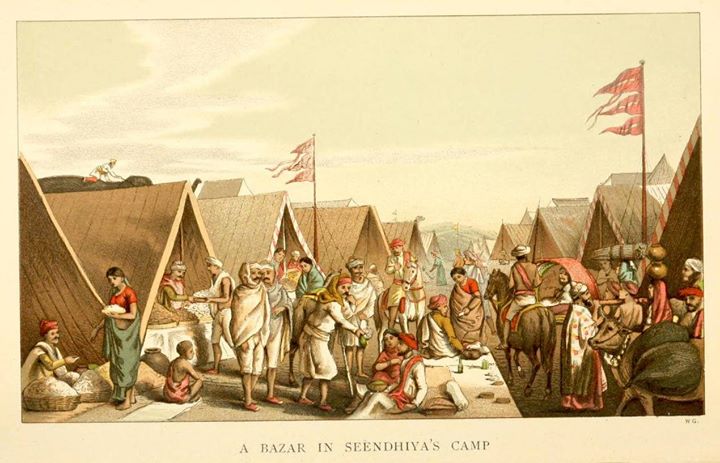 Digital Rare Book:
Letters written in a Mahratta camp during the year 1809, descriptive of the character, manners, domestic habits, and religious ceremonies, of the Mahrattas.
By Thomas Duer Broughton
Published by Archibald Constable & Co., London - 1892

Book Extract :
"The only one of Colonel Broughton's writings which seems to have attracted any general attention was that which recorded his experiences in the Camp of Scindia, where he lived as Commander of the escort of the British Minister, or, in Anglo-Indian phraseology, the Resident, deputed to keep up relations between our Government and that Potentate.

It is well, perhaps, that a narrative like this should have been left behind by a man for whom the scenes which he describes had no novelty, and who saw nothing very extraordinary either in the picturesqueness or the squalor of his surroundings in a Mahratta Camp. Here and there some display more brilliant than ordinary excites his admiration,or some peculiarly horrid atrocity is duly reprobated ; but the dirt and the scampishness, and the absurdity and the; impecuniosity, and the faithlessness and the mutiny, and the extortion and the superstition seem to him, so to speak,"all in the day's work."

If his rather matter-of-fact method of treatment detracts from the pleasure which the reader experiences, the truthfulnessof the picture is brought better home to the mind than it could have been by a more brilliant presentation, and, after all, nothing much could have been made of themain story Colonel Broughton had to tell. Something no doubt might have been made of the accessories, but he does not seem to have had much interest in nature, or much acquaintance with the history of the country inwhich his lot was cast. His literary power was small, and he constantly forgot the maxim which he probably learnt at Eton, "the half is more than the whole;" but he was fortunate in the moment at which he served in India. Only a few years before, the Mahratta power, which seemed likely, up to its crushing defeat at Paniput in 1761, to overshadow the whole peninsula, and which even after that catastrophe was strong enough to give us a prodigious amount of trouble for nearly sixty years, received its death blowon the field of Kirkee."