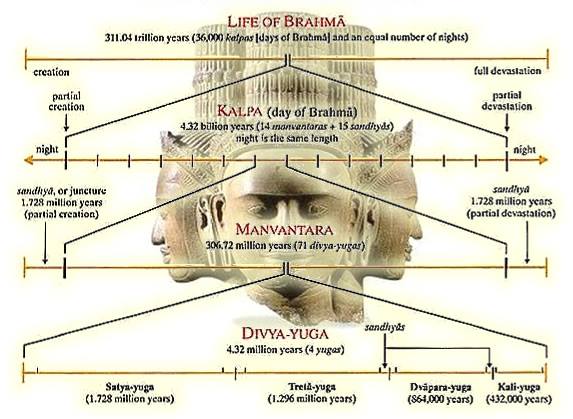 In 2012, CERN, the European Organization for Nuclear Research, called for a debate between scientists, philosophers and theologians to find common ground between science and religion over how the universe began. Even though the explanations found in the texts of the world's spiritual traditions are admittedly not exhaustive in the details referring to the origin of the universe, they do outline key concepts thereof which are important to the development of the philosophy for spiritual development that they present. The Vedic cosmology of ancient India is incredibly rich and has many points of tangency with modern cosmology, which may help in the construction of that common ground between science and religion that CERN is looking for.

One of the strongest points of tension that often comes up in cosmology between science and religion is the age of the universe. Some interpretations of the Bible calculate it to be about 6,000 years old, while the most recent calculation according to the Lambda-CDM concordance model is 13.8 billion years. The Vedic literatures see the manifestation and eventual destruction of the universe, like most events in nature, as a periodic occurrence and give it in trillions of years. In fact, they talk about an expansion of the universe after its inception and an eventual contraction at the end of its lifespan, in line with modern cosmology's concepts of inflation and/or dark energy. Ideas regarding a cyclic behavior of the universe have also been proposed by prominent physicists like Sir Roger Penrose and Paul Steinhardt. Vedic cosmology also states that within the lifespan of the universe, there are periodic partial devastations of the universe. The time elapsed since the last one is on the order of billions of years, which roughly corresponds to the age of the universe calculated by cosmologists. In between the partial devastations, there are time periods called ages. The current age we live in, the Age of Kali, began about 5,000 years ago, which is roughly in line with (or equivalent to) the Bible's estimates of the age of the universe. We can thus begin to see the potentiality of Vedic cosmology in creating a bridge between science and religion: The apparent contradiction regarding the age of the universe can be regarded as simply calculations of different important periods in the history of the universe.

Knowledge is neither western nor eastern - it is a continuum. The harms Brits did was to introduce English medium as a medium of instruction than part of language arts. No need to regret it but the time to fix it like most countries in the world. Knowledge has no geographical limits but the learning process is critical and is more effective when learnt in mother tongue and native context. Diversion of knowledge is myth but discontinuity is the fact of the past. Why to blame West when you guys are still using the same colonial process of education when the rest of the world advanced? China is now on the top of the list in structural engineering - it is not western country. Also, 70s made in japan meant crap, now it means quality in both process and product. China had been poor in quality and one incident made them refactor themselves and now it's (exports) products are no inferior to any product manufactures in USA. South Korea has most inventions than US and Europe together in some areas - it is not a western country. Please do NOT always point at West. Most Indians who come here and produce sub-par output - both in engineering and medicine. They don't know how to enjoy the journey and consider money as the end with complete lack of passion - and live in the self-deceptive that every one in USA thinks the same. I am not referring to all but on an 80/20 basis. Don't take me wrong - I was born in India. However, unless we identify our problem, it cannot be fixed. It is the time wake-up, stop living in the past accomplishments, look at what we contributed since 1000 AD (least or close to none on a relative scale) and make an effort to fix the thought, process, execution and outcome. USA might have not invented many products but it is the country where innovation and entrepreneurship flourish at the cost of several failures and severe losses, and it is the country where innovation and entrepreneurship bridge the gap between theory/invention and purpose/mass utilization. Current Indian education is way behind in comparison with USA/West. BTW, I did not know about Vedas/ Upanishads until I get to USA, and like everyone else I thought they were mere myths until started studying them. It was some people in/from USA who educated me and mentioned about the sciences/arts behind the Vedas. Most Indians (usually priests) study these and interpret them only in one way - religious - in fact, they have very less to do with any religion. I do not see any reason to praise the ancient wisdom and knowledge without acquiring them - other than for false pride-when in fact, West is the one that started reviewing them with fresh senses.Too long of a response - confused to digest and float above the limit of the patience, agreed, :-) - well, I am not the one who reads it - so not the one who experiences pain - Good Luck ;-)

4.5 billion years ago, the duration of a day was about 6 hours - about 1/4th of the duration of the present day, and the length of the year was significantly different from the present - much as the distant future year will be much longer than the present! Thus need to keep in mind the nature of "compressed time" in the very distant past.The Hindu measure of time as enumerated in Surya Siddhanta straddles multiple creation and dissolution events. Current ideas of time (in our current reality), is that it began with the Big Bang singularity, as exemplified by this essay: http://www.hawking.org.uk/the-beginning-of-time.html

thank you for that

Mauricio HuffPost India & other commentators are suffering from what I call #Colonialitis conditioning via western christian education. Vedic View is of continuous Universe with no Bing Bang or any event of so-called creation. With that in view there can be no place in it for much later conceptualised Abrahamic God with the most exclusivist theology that mutually excludes three Abrahamic Faiths let alone Sanatana Dharma which has inclusive, integrative & indiscriminate culture, charateristics & practice. That has lead me to coin another word in connection with CERN - CERNtainty Principle in which the exclusivist ideologies simply cannot be integrated into the Vedic Wisdom.

This is an eye opener! Thanks!

Sreenivas Chaparala Knowledge belongs to those who practice it & teach it. Not those who sit on it and sing its praises or how great it was in the past. Blaming the West for the problems we ourselves created is the easiest escape route to denial.

There are still lot of knowledgeable pandits in our sanskrit universities. They can be involved in such scientific pursuits. Only obstacle might be that they know little english. But they can converse in fluent sanskrit and so it wont be much of a problem.

Religion and science dont mix, religious people trying to justify the biggest blunder in all types of religious history, seems to me as an atheist, people are starting to see logic more than what is written in stone, paper or word of mouth.

Thanks for sharing such nice topic here.. I must share..

Is any western engineer possible to construct this kind of temples, here is the one example to say we lost our ancient knowledge

Torah,Bible,Quran and the Purans each of them say the same thing.It is interesting as howthe universe was formed.

There is of course the basic dignity and depth of being educated, conducting research, and doing business in one's own language.

I am not in an opinion that to compare science and religion! such things are stupid! All over the world the religious leaders interpret the absurdity with the help of science!