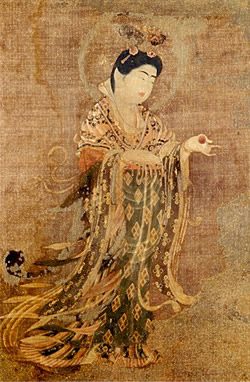 Originally, Kichijoten was imported into Buddhism from Hinduism, being known as Lakshmi, the goddess of beauty and prosperity. This painting is likely to have been the central worshipping piece, if not its important element , of Japanese Buddhist rituals during the Nara period (701-794). She has crescent-shaped eyebrows with full cheeks, and moves leisurely and gracefully in a striking multi-layered attire, like a Chinese beauty of the Tang period (618-907). Though, a sacred gem on her left hand and her transparent shawl fluttering gently in the wind as she walks suggests her heavenly nature. Its renderings not only delicate and elegant, but also infused with a stately Buddhist serenity of its own, the painting radiates a special charm.Paintings dating back to the Nara period are a rarity even in Japan. Invaluable as a Buddhist painting, its opulent and noble spells are delightful to the eye indeed.

I have one in porcelain!