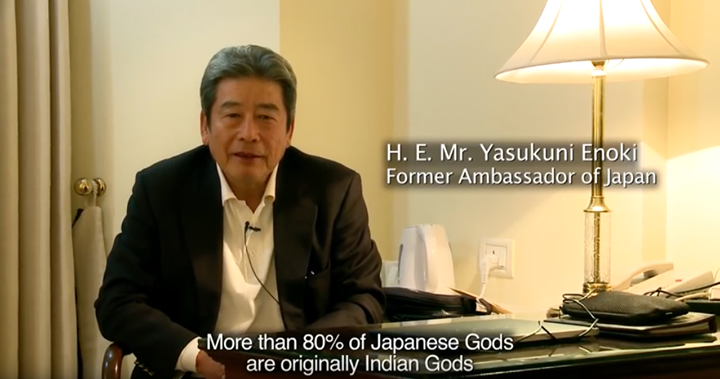 There is a very important bridge of culture joining the countries of India and Japan. In the words of HE Mr. Yasukuni Enoki, Former Ambassador of Japan, “It is very important for the Japanese to know that in the bottom of Japanese culture, Indian culture is very firmly imprinted”.

Buddhist and Hindu deities of India are worshiped by the people of Japan. The 5th century Sanskrit script is revered in Japan and its letters denoting different deities, are considered sacred by the Japanese.

Thanks to Sunny Narang for providing this video.

Not only that, there's also a striking similarity between the Shinto emphasis on worshipping one's ancestors and our reverence for our "pitris" or forefathers. The "svadha mantra", which is invoked for one's departed ancestors, is an integral part of our spirituality.

This is very much true and not only in Japan but anywhere in the world, there are lots of similarity and roots that leads to Indian Deities. I must share... Thanks for the fine video.

Mayur Shah you might want to check this out.

Tell that to congi media , they will hang their heads in shame.

Yadihasti tad anyatra yannehasti na kutrachit...... What is found here can be found elsewhere......and that which is not here, will be nowhere...... thats the greatness of Maha-Bharat the epic and the nation :D