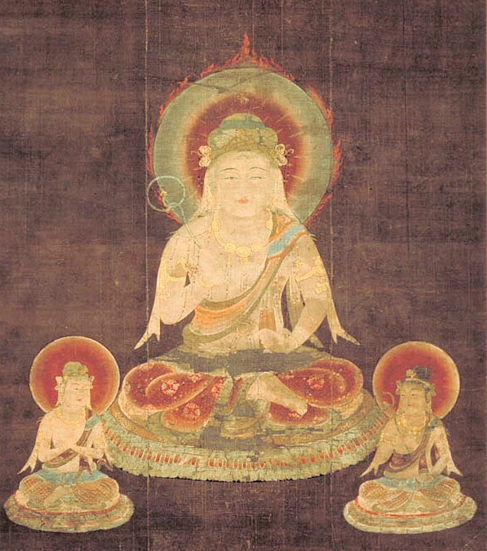 The Twelve Devas are the gods of the twelve directions in Esoteric Buddhism, including the four quarters and four semi-quarters, up and down, and the sun and moon, and are the guardians of Esoteric Buddhist monasteries. These scrolls were formerly owned by Kyoogokoku-ji (To-ji) Temple and, along with the images of the Five Vidya-Rajas (Godaisonzo), were used in the annual, Mishio New Year's ceremony of esoteric prayers, held at Shingon-in in the Imperial Palace.

Each of the devas is seated on a felt pedestal with an attendant on either side. The flesh of compassionate devas is outlined in red, while those with angry and other expressions are contoured in black. Color gradation is used to give the figures depth.

The draped folds of the robes are created with various gradation and highlighting techniques in a range of colors and tones. The draped robes are decorated with multi-colored patterns and delicate kirikane (cut gold leaf) motifs, including repeating shippo (seven treasures), manji (reverse swastika), tatewaku (undulating lines) and diagonal check patterns. Other features include the technique of ungen (step-like tone gradations) and the simultaneous use of the four rich colors of blue, red, green, and purple (konntanryokushi).

These images seem less rigid than the set of Five Vidya-Rajas (Godaisonzo; indeed, those with angry expressions appear almost lively. This set of the Twelve Devas is without a doubt one of the finest masterpieces of Buddhist painting from the period of the cloistered emperors.

According to the To-ji Temple records, Toboki, the original set of Twelve Devas was painted sometime in the early Heian Period, but destroyed at an early date. The scrolls were re-painted in 1040 but again destroyed in a 1127 fire. The decision was made to have a new set of Twelve Devas and Five Vidya-Raja made that year. The new scrolls were modeled after paintings in the Ujikyozo Repository, but they were criticized by the cloistered Emperor Toba as being too "sparse." Finally, the set was re-painted based on the Ninna-ji Endo manuscript. The Twelve Devas owned by the Kyoto National Museum are considered to be this re-painted set. Some scholars suggest that two of the scrolls, Fu-ten (Vayu) and Bon-ten (Brahma) came from the 1040 set.

Image:
Sui-ten (Varuna) (One of the Twelve Devas)

Sui-ten (Varuna) (One of the Twelve Devas)
Sui-ten is one of the Twelve Devas scrolls that were produced in 1127 for the annual, New Year's ceremony of esoteric prayers held at Shingon-in in the Imperial Palace. They were formerly owned by Kyo'ogokoku-ji (To-ji) temple.

Sui-ten (Varuna) is a fair figure clothed in softly-colored and finely-decorated garments. He emerges gracefully from the dark-brown background like a water spirit, as his name, literally "water deva," suggests. His knees are highlighted with white gradations and decorated with delicate, finely detailed patterns. Such decorative techniques are characteristic of the late-Heian Period when production of Buddhist paintings was at its height.