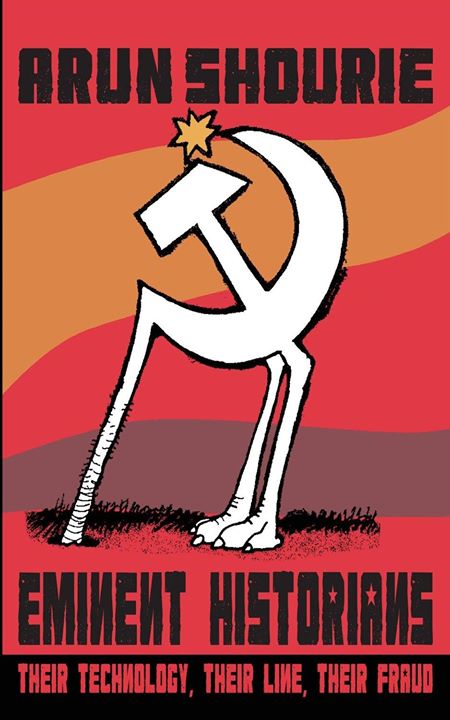 New Book:
Eminent Historians: Their Technology, Their Line, Their Fraud
By Arun Shourie
Published by HarperCollins - 2015

Eminent Historians: Their Technology, Their Line, Their Fraud by Arun Shourie, offers an authoritative exposé on the NCERT controversy. The author attacks Marxist historiography in India and showcases how historians represent facts to suit their own agenda. Eminent Historians examines why the greatest names in historiography do this and why the Government goes out of its way to support them.

Summary of the Book:

'Shourie has the anecdotal reasoning of Nirad Chaudhuri married to the writing style of Robert Ludlum. Both are in ample evidence in this book.' - India Today

In this incisive commentary, Arun Shourie documents the ways in which our history textbooks have been doctored by leftist historians. Thoroughly researched and riveting, this study brings to light the techniques and frauds that a cabal of some of our best-known academicians has used to promote themselves, and to acquire control over institutions. And then to put these supposedly academic institutions to use.

Shourie shows how, in the process, this cabal has perverted India's historical narrative, and thereby vitiated the country's public discourse. Two new chapters bring to light recent developments in the field: how, with their holy scriptures having been repudiated in their holy cities, these 'historians' strive to retain their perches by dominating niche domains; how these efforts are bound to fail; but how their trajectory holds vital lessons for those who seek to replace them.

Hegelian Marxist dialectics is used to deny Krishna's divinity and denigrating Brahmanic hinduism and caste system. To the liberal left indian history starts with a 3 millennia old conspiracy of racist invaders who continue to oppress the native tribal population. They recoil at the idea that gods once walked this blessed subcontinent.

These are the same Marxists,a majority of them who claim indian ancient history began from the era of alexander's invasion & that the period between the late indus valley era upto birth of lord buddha and lord mahavira is termed by them as dark age.What can be more ridiculous than today's generation falling a prey to such leftist & communist historians & researchers

Rare Book Society of India, *Thank You* for clearing away the cobwebs!

Who & what is God? Who is a human? What is the relationship between God & human? Is it of Master & Slave? Or of equals?

So glad my gut feelings were true . A few years ago some woman from the US an art historian of dubious repute wrote a book trashing our culture and all these so called academics indulged & pampered her . I found that so shocking . I will repost her name etc .

This book a game changer .

Neither slaves, nor equals. Prajapati created us from his own body by dismembering it, so we are a part while he is full.