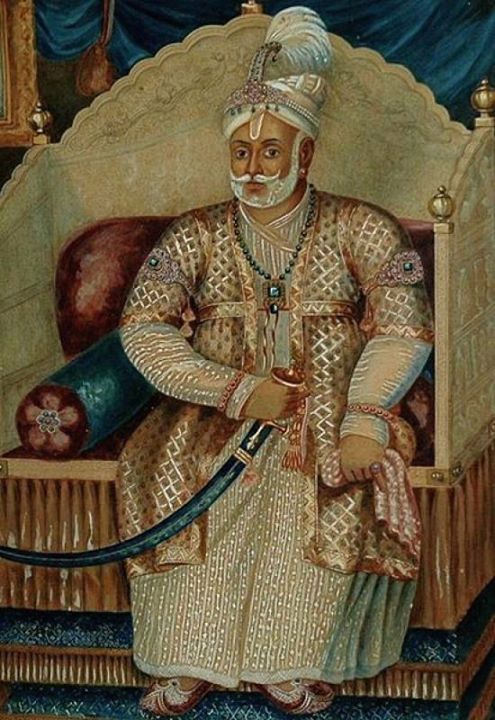 Digital Rare Book:
A History of Travancore from the Earliest Times
By P. Shungoonny Menon
Published by Higginbotham & Co., Madras - 1878

Dharma Raja Karthika Thirunal Rama Varma (1724–17 Feb 1798) was the Maharajah of Travancore from 1758 until his death in 1798. He succeeded his uncle Marthanda Varma, who is credited with the title of "maker of modern Travancore". During his reign Dharma Raja not only retained all the territories his predecessor had gained but administered the kingdom with success. He was addressed as Dharma Raja on account of his strict adherence to Dharma Sastra, the principles of justice by providing asylum to thousands of Hindus and Christians fleeing Malabar during the religious and military onslaught of Tipu Sultan.

Read more in the Wiki:

Tipu Sultan was never a saint, let it be known.

Please don't mind if I say that the rulers of Travancore were Jats. No person from north India except Jats of UP add Varma as their Surname.

Varma is a pretty old surname in the south. So much so that the southern culture that spread to Indochina has had many Varma/Varman kings.

"the author traces the defeat of Tipu Sultan not to superior British military acumen but to Tipu’s disastrous decade long campaign against the Travancore Nair regiments. The British used the military strength of the Nairs to draw Tipu into a battle of attrition and contrary to popular wisdom; it was British commercial and diplomatic acumen rather than military strength that broke the back of Tipu..." Danvir Singh http://bit.ly/1iTdF9e

So much of amazing history that we do not know.

So much of amazing history that we do not know.

@ Mr Phaugat- Travancore rulers, Nairs by race were raised to the caste/status of Samantha Kshathriya by the sacerdotal dignitaries of the time. According to the Hindu Shastras- Sharma denotes Brahmins, Varma Kshathriyas, Gupta Vaishyas and Dutta/Dasa Shudras.

Thanks. But how come that the Varmas exist in both north and the south. The northern Varmas call themselves Jats whereas the southern Varmas or actually Varmans had no connection with those living in the north. This is intriguing. Can we explore further...........?

Ranbir ji I appreciate your Interest in this matter I will try to share with you some material and information at my disposal.