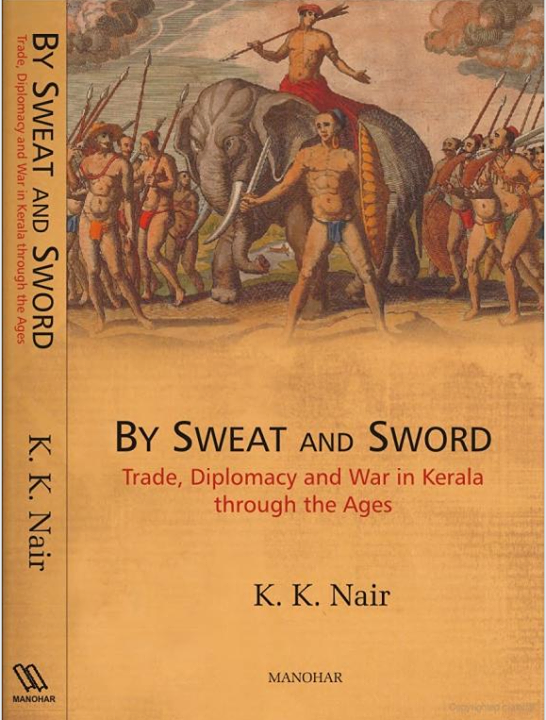 New Book:
By Sweat and Sword: Trade, Diplomacy and War in Kerala Through the Ages
By K.K. Nair
Published by Manohar Publishers, New Delhi - 2012

Book review:
"All that one knows about Indian history is that Delhi was slammed into submission repeatedly and that down south, history was nothing more than a tripartite musical chair of Cholas, Cheras and the Pandyas jostling for political ascendancy.

This book challenges all such notions. It builds up on a huge repository of Arab, Chinese, Portuguese, Dutch, French, English and Persian literature to present an altogether different picture of how events unfolded over centuries on the Malabar Coast causing a ripple effect not only in the Indian subcontinent but across Asia and Europe as a whole.

Beyond recounting events, the manuscript analyses the effects of the internecine battles as also the battles to stave off invasions from China, Europe and the northern Muslim sultanates on the overall body-politic of India as also Europe and Arabia. For instance, the effect of the military alliance of the Calicut Rajahs with the Turkish Ottoman Empire and later Mamluk Sultan Al-Ashraf Qansawah Al-Ghawri against the Portuguese impacted the economic and political fortunes of both Europe and Asia. On similar lines, the author traces the defeat of Tipu Sultan not to superior British military acumen but to Tipu’s disastrous decade long campaign against the Travancore Nair regiments. The British used the military strength of the Nairs to draw Tipu into a battle of attrition and contrary to popular wisdom; it was British commercial and diplomatic acumen rather than military strength that broke the back of Tipu. The British military did nothing more than deliver a Coup-de-grace to the severely wounded tiger of Mysore. A fact borne out later by Tipu’s empty treasury and hollowed-out military structure. The book is replete with many such instances which challenge one’s conventional view of history in the making of India, Arabia and Europe. The perspective is shockingly non-traditional and in that singular eccentricity lies the appeal of this book." - Danvir Singh

Thanks to Vinod Razdan for suggesting this book.