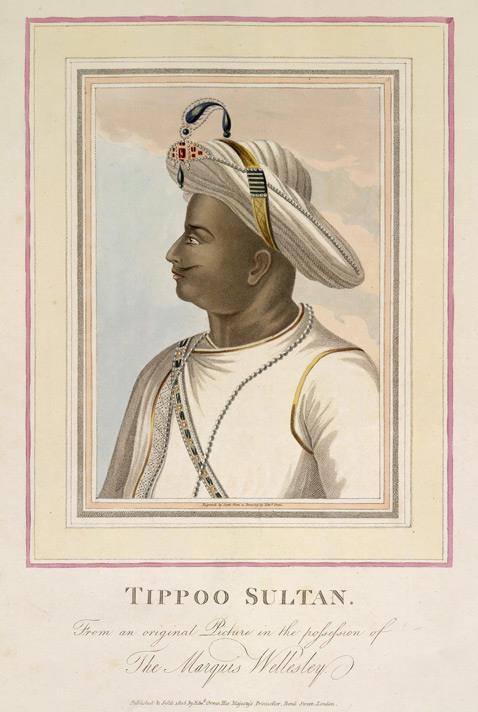 The prize property seized at Seringapatam immediately after its fall was estimated at 40,30,300 star pagodas, equivalant to £1,600,000, This property was thus made up :

The jewels were subsequently estimated at 9 lakhs. Apart from this property, the military stores seized were valued at 10 lakhs. The total number of ordnance captured was 929, including guns, mortars and howitzers, 176 of which were twelve pounders and over. The booty in the Palace included a magnificent throne, a superb howdah, curious and richly-jewelled match-locks and swords, solid gold and silver plate, costly carpets and china ware, a profusion of fine gems and a very valuable Library. The Library was at first ordered to be given to the Court of Directors for the foundation of their Eastern Literature, the duplicate copies being sent to the Asiatic Society at Calcutta. But subsequently, except one precious copy of the Koran, referred to below, the greater part of it was transferred to the newly founded College at Fort William, Calcutta. A diamond star and ornaments were presented by the British Army to Marquess Wellesley. Tipu's war turban, one of his swords, and a sword of Morari Eao, the famous Mahratta ruler of Gooty, were sent to Marquess Cornwallis. A sword found in Tipu's bed-chamber was publicly presented by General Harris to General Baird, who had led the assault. The sword of Tipu, i.e., the one he usually used and reckoned distinctively his own, being one usually placed in his Musnud, was presented, on behalf of the British Army, by Major Allan, Deputy Quarter-Master-General in person, at Madras, to Marquess Wellesley. Major Allan was the first to visit Marquess Wellesley after the conquest of Seringapatam.(Seringapatam fell on 4th May and he visited the Governor-General at Madras on 30th May). He was made Honorary Aide-de-camp to the Governor-General in recognition of his meritorious services. On the handle of the sword presented by him to Marquess Wellesley was the following inscription :

"My victorious sabre is lightning for the destruction of the unbelievers, Haidar, the Lord of the Faith, is victorious for my advantage. And, moreover, ho destroyed the wicked race who were unbelievers. Praise be to him, who is the Lord of the Worlds ! Thou art our Lord, support us against the people who are unbelievers. He to whom the Lord giveth victory prevails over all (mankind). Oh Lord, make him victorious, who promoteth the faith of Muhammad. Confound him, who refuseth the faith of Muhammad ; and withhold us from those who are so inclined. The Lord is predominant over his own works. Victory and conquest are from the Almighty. Bring happy tidings, Oh Muhammad, to the faithful ; for God is the kind protector and is the most merciful of the merciful. If God assists thee, thou wilt prosper. May the Lord God assist thee, Oh Muhammad, with mighty victory."

On most of the furzees and blunderbusses found in the palace of Tipu, the following inscription in Persian, was seen :

"This is incomparable piece, belonging to the Sultan of the East, which has no equal but in the most vivid lightning, will annihilate the enemy that it strikes, although Fate should otherwise have ordained him to live”.

On some gold medals, also found in the palace, the following legend, in Persian, was seen on one side : " Of God the bestower of Blessings" and on the other, "Victory and conquest are from the Almighty”. Apparently they were struck in commemoration of some victory probably after the war of 1780. The following is a translation of an inscription on the stone found at Seringapatam, which was to have been set up in a conspicuous place in the Fort :

"Oh Almighty God ! dispose the whole body of infidels! Scatter their tribe, cause their feet to stagger ! Overthrow their councils ! change their state ! destroy their very root ! Cause Death to be near them, cut off from them the means of sustenance ! shorten their days ! be their bodies the constant object of their cares (i.e. infest them with diseases), deprive their eyes of sight, make black their faces (i-e. bring shame and disgrace on them), destroy in them the organs of speech ! Slay them as Shedaud (i.e. the Prince who presumptuously aimed at establishing a Paradise for himself and was slain by command of God) ; drown them as Pharoah was drowned ; and visit them with the severity of thy wrath. Oh Avenger ! Oh Universal Father ! I am depressed and overpowered, grant me thy assistance."

This inscription should have been engraved after the conclusion of the Cornwallis Treaty. It shows Tipu's inveterate rancour and determined enmity to the English, of which there are numberless proofs, On this occasion, one might suppose that he had taken a leaf out of Ernunphus' book of Curses.

The Throne which formed part of the booty was a newly made one. Its principal ornament was a tiger's head of life-size, wrought in gold, which served as the support of the throne. The bas-reliefs of the throne, which was approached by silver steps, were decorated with tigers' heads worked in gold and adorned with precious stones. Over it was suspended a huma or bird of Paradise, whose brilliant wings, encrusted with diamonds, rubies and emeralds, hovered over the Sultan. The huma formed the apex of a canopy, fringed with pearls, which was attached to a gilt pillar seven feet high. At Windsor Castle are preserved the royal foot-stool of Tipii and the richly-jewelled bird, the humd above mentioned. Among other relics of Tipii, there are portions of bis tent with silver holes, ivory chairs, elephant and horse trappings, a palankeen, two richly ornamented field- pieces, and various weapons including the sword and shield which were found with his body after the siege. In the Library of the Castle is a copy of the Koran formerly belonging to the Emperor Aurangazib, which was found in Tipu Sultan's Library. It is said to have cost Rs. 9,000, and is beautifully written in the Naksh character, with elegant ornamentations. The rest of Tipu's Library contained many curious and interesting manuscripts, of which the following is a summary :

Some of these manuscripts belonged to the Kings of Bijapur and Golkonda, but the majority were acquired by plunder at Chittoor, Savanur, and Cuddapah.

Image:
Tippoo Sultan. From An original picture in the possession of the Marquis Wellesley - 1805

Plate one from 'Picturesque Scenery in the Kingdom of Mysore' by James Hunter showing a portrait of Tipu Sultan (1753 -1799), the Muslim king of Mysore who waged war against the British during the late 18th Century. According to Hunter, this picture is based on a portrait which was owned by Richard Colley Wellsley (1760-1842). In 1799, during the Fourth Mysore War, Wellesley was the Governor General of India. Tipu Sultan died during this battle while defeding his capital at Srirangapattnam.

No. This is Tipu Tib. A famous Arab slave trader.

Tippoo Tib, the story of his career in Central Africa by Brode, Heinrich http://bit.ly/1GYTh2n