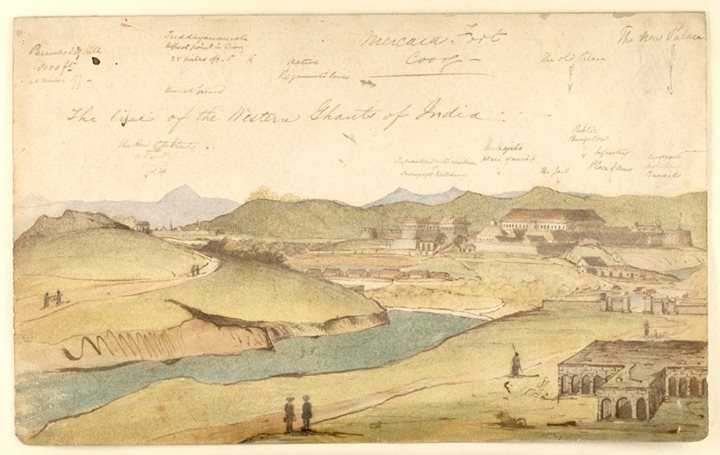 Pen-and-ink and water-colour sketch of Madikeri by an unknown artist, c.1840. On the back is an unfinished portrait sketch. Inscribed on the front in ink is: 'Mercara Fort; The line of the Western Ghauts of India'; also notes on various buildings and hills.

Mercara or Madikeri is situated in southern Karnataka (formerly Mysore), southern India in the Western Ghats at an elevation of 3,800 feet (1,160 metres). The Lingayat Rajas ruled over the area from 1600 onwards and established their capital at Madikeri where they built a mud fort. The fort is set on a rocky outcrop surrounded by hills. It is roughly hexagon in shape set behind a ditch with a sloping bank to the north face. In the 1770s and 1780s the fort was attacked by Haidar Ali and Tipu Sultan. In 1791 the fort was overwhelmed by Vira Raja of Coorg (Kodagu). The British excluded Tipu from the area by the treaty of Seringapatam (1792) and Vira Raja was restored to power. Later the subjects of Vira Raja complained of their ill treatment and sought British protection which was secured by the unopposed annexation of Coorg in 1834.

Text and Image source:
Copyright Â© The British Library Board

I am a bit surprised that the British Library text says that there was an unopposed annexation of Coorg by the British. There was actually a sharp little war. One of my 4 x great uncle's was involved in the intelligence gathering prior to the war, and was involved in rounding up Coorgian insurgents who were raiding down towards Mangalore and Cannanore. Canarakera Menon his Sheristan went up to the frontier with Coorg and was captured by a snatch squad from Coorg. He was held in jail in Mercara until after the town fell to the EIC. The Coorgian's had a system of earthworks defences that lined the very limited number of tracks that led into the heavily forested country. Barricades after barricade crossed these tracks. The banks must have been similar to Devon or Cornish hedges from what I can understand. There was very fierce fighting before these were overcome. I wonder if any of these banks survive to this day? Here is an account of conditions inside Coorg before the British invaded. Perthshire Courier - Thursday 23 July 1835 THE COORG COUNTRY. [A correspondent has politely favored us with the following particulars, regarding this interesting portion of Hindustan, lately conquered by the British :] The Police in the Coorg kingdom was kept up with great vigilance: no one could enter it without the knowledge of the Police Officers, and whoever did was strictly watched till his departure; no inhabitant dare utter word of what was going-on in the country. consequence this, for years past very little has transpired of what was taking place, and the people are even now afraid to open their lips. In building the palaces at Marcara, and the Mausoleums of the former Rajahs, forced-labour was employed with great severity, and has been the cause of great distress and depopulation in the country. Individual cases of cruelty too on the part of the Rajah are not wanting, and his rule was assuredly an iron one. The very commencement of his reign was inauspicious, for it being suspected that his father Linga Rajah had died by poison, the Rajah ordered the suspected person Pundit submit to the ordeal of boiling-oil, to which consented, and his hand, might have been expected, was dreadfully scalded. In vain pleaded that this was the Kali age, and the ordeals were no longer efficient criterions of guilt. The Rajah, from an upstairs verandah in which he was was sitting, gave a signal, and those who were standing by struck immediately their spears into his body, and lifted him in the air. Eleven other Brahmins who were suspected were wrapt in mats and heat death. An old man named Tuotri and his son Vishnoo, not being acquainted with these circumstances, came from the low country Marcara to see Pundit Ramaya, who was a friend of theirs. Upon their asking a Brahmin whether Pundit Ramayun was well,” the Brahmin fled horror, and the question having been overheard by two watchmen, who reported it to the Rajah, both the father and sonwere summoned into the Rajah’s presence, and beat to death. Another person Shastri, who was ignorant Pundit death, was called by the Rajah, and upon his replying to a question whether Pundit Ramaya a good or bad man.” that he was good one, had his ears and nose cut off. In 1828 or 29 a parsee named Horjee was alleged to owe the Rajah 40.000 Rupees. He went to bring the money and left his brother in Coorg. The Rajah in order to extort the money caused him for six months sleep in the open air on the top of a moun tain. He subsequently caused a person strike him with his knee on the back every morning and evening. and finally, as he positively refused to pay the money, his feet were tied and he was dragged through the town till he died. also said that British subject named Pereira, who fled from Cannanore into Coorg some years ago and was subsequently forcibly detained there, met a violent death at the hands of the Dewan Busuppa some months before the commencement the war, but have not been able ascertain whether this report is well founded. The most singular feature in the Government of was the frequent infliction of corporal punishment on the public servants of Government of the highest as well as of the lowest rank. The number of stripes administered was in proportion to the rank of the offender, for while peons and inferior servants received only a few stripes, the Soobadars received about 110 and the Dewans 120; and besides this, they were obliged to carry earth equivalent what is usually called working upon the roads,” and this took place about once year—the only reason that can assigned for such a punishment, is that the Rajah imagined that by degrading all under him he elevated himself and so reigned the Maha Swami.” That his reign has terminated can be matter of regret to none.

Wow spectacular. The colours are awesome