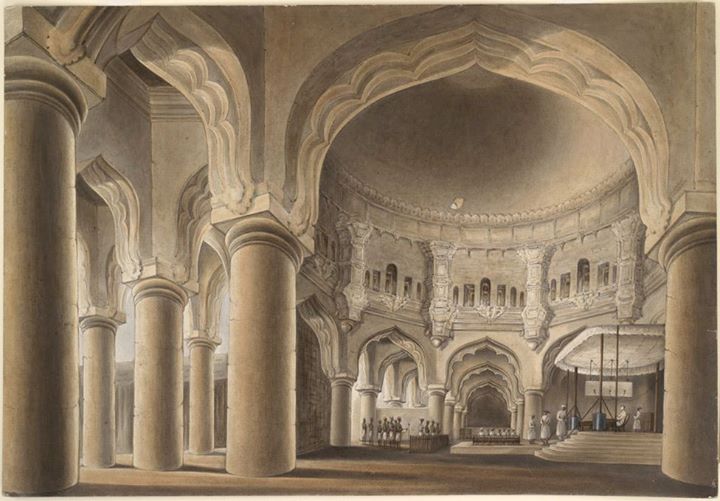 Watercolour drawing of the Svarga Vilasa (Celestial Pavilion) or Throne-room of the palace of Tirumala Nayak at Madurai, by an anonymous artist working in the South Indian/Madurai style, c.1850. Inscribed in pencil on the reverse: 'The great Dome of Trumal Naig's Palace at Madura used as the Court House of the Civil and Session Judge. By a Native Artist.'

Tirumala Nayaka (r. 1623-59) was one of the most important rulers of the Nayaka dynasty and was an ambitious builder; the Minakshi Sundareshvara Temple complex which dominates the centre of the town dates to his reign. The Tirumala Nayaka Palace was built in 1636 and was intended to be one of the grandest palaces in South India. Yet shortly after the palace was completed in 1659, Tirumalai's grandson Chokkanatha took the Nayaka throne. During Chokkanatha's reign the capital was transferred to Tiruchirapalli and large parts of this palace were dismantled. The courtyard, entrance gate, dance hall and main hall, seen here, are the only parts of the palace that are left extant from the original structure. The Celestial Pavilion (Swarga Vilasa) was used as the throne-room and has an arcaded octagon covered by a dome 60-70 feet high. In this drawing, the space is being used as a court room, the judge is on a dais under a punkah and canopy on the right, with clerks and plaintiffs ranged before him. The judge in this picture is C.W. Baynes, District Judge of Madura 1846-55, who commissioned paintings from Madurai artists and also collected other schools.

Amazing. And this was over 350 years ago. Thanks for digging up and posting all these interesting facts.

Thank you Joanna. Love reading all your posts.