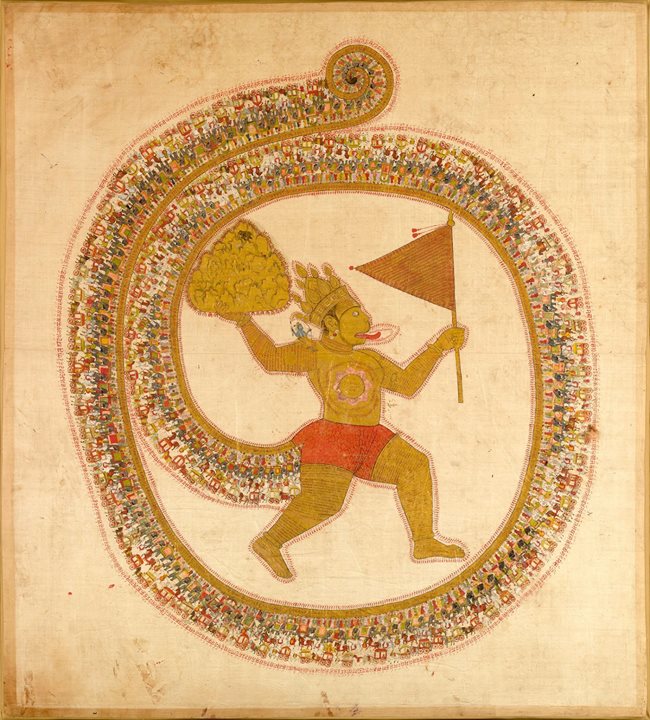 This devotional image of Hanuman celebrates his most famous heroic feat—carrying the Mount Sanjeevini to Rama and Lakshmana, who, gravely wounded in combat, were in desperate need of the medicinal herbs that grow on its upper slopes. Unsure which plants to gather, Hanuman breaks off the entire peak and carries it through the sky back to Rama. On his shoulder is a diminutive image of his Lord. Hanuman's mighty tail carries his army, which encircles the monkey general and Rama, emblematic of the strategic importance of Hanuman's alliance to Rama's victory against Ravana on Lanka. This painting is a reminder of the significant cult devoted to Hanuman that emerged in later periods; his supernatural strength, military prowess, and above all loyalty were qualities much admired, especially by the Rajputs.

Text and image credit:
© The Metropolitan Museum of Art

Link for an enlarged picture: http://bit.ly/1GYss8P

Can you provide me a link for the original print copy of constitution of india.. Is there any scan copy or images of complete constitution?

please be in touch

Digital Rare Book: The Constitution of India (Original copy) Photolithographed at the Survey of India Offices, Dehra Dun, India - 1950 This book is one of 1,000 photolithographic reproductions of the Constitution of the Republic of India, which came into effect on January 26, 1950, after being approved by the Constituent Assembly on November 26, 1949. The original of this elaborate edition took nearly five years to produce. It is signed by the framers of the constitution, most of whom are regarded as the founders of the Republic of India. The original of the book is kept in a special helium-filled case in the Library of the Parliament of India. The illustrations represent styles from the different civilizations of the subcontinent, ranging from the prehistoric Mohenjodaro, in the Indus Valley, to the present. The calligraphy in the book was done by Prem Behari Narain Raizda. It was illuminated by Nandalal Bose and other artists, published by Dehra Dun, and photolithographed at the Survey of India Offices. Read book online: http://bit.ly/WChCPk Download pdf Book: http://bit.ly/WZZPjf

It's preserved because it's in the metropolitan musuem. Otherwise it would have been gone gone. That too circa 1800!! Thanks RBSI

If you look closely, there is writing all around the army on the tail. I thought it might be scripture or a prayer etc, but it's just the devanagiri alphabet repeated over and over. Would anyone know why this is?

Btw it was Lakshman who was gravely wounded not Rama dear Lord Ram sent Hanumanji for the Sanjeevani booti :) FYI