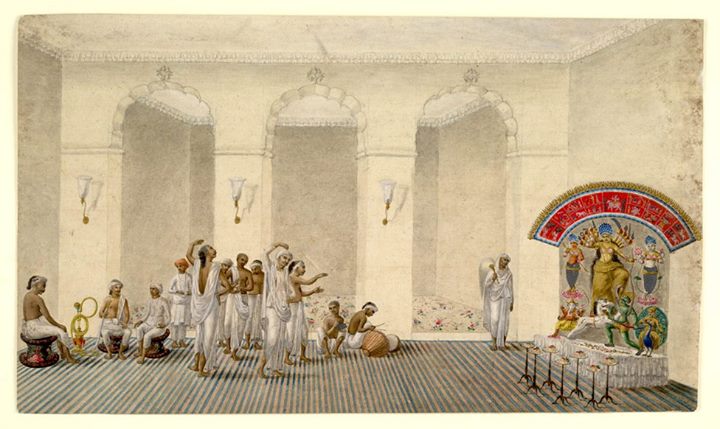 Durga is a form of the Great Goddess Devi; she is considered to be one in a variety of personalities of the Hindu goddess. She is most well known as the goddess who killed the Buffalo Demon Mahisha. The Durga puja is an autumn festival where her victory is celebrated and other elements of her mythology are remembered. In this drawing, male dancers and musicians are performing before an image of the goddess Durga installed inside a house. The shrine to Durga depicts her in the moment of triumph over Mahisha. On the left a group of three men are seated on painted stools, one smoking a hookah.

"Traditional Bengali Hindu households celebrate Durga Puja for ten days, while the main Puja is restricted to five days only. The day of the new moon at the beginning of Autumn is known as "Mahalaya." The artisans draw the eyes of the Durga images on this day and this process is called "Chakshu Daan". The Main Puja, or worship, starts on "Shashthi" i.e. sixth day, generally underneath a "Bael" tree. In the early hours of "Saptami" or the seventh day, the "Pran" or life of the the goddess is brought from a nearby pond or water body, wrapped in a Banana plant and then reinstated on the "Ghat" and then to the Image. The banana plant is wrapped in a new red and white saree resembling a newlywed bride sitting in a Palanquin, hence its name "Kola Bou" or Banana Bride. The process of virtually implanting life into the Ghat and then into the Image is known as "Bodhan". The prime of the Puja is reached during the transition phase between Ashtami (eighth day) and Navami (ninth day), known as "Sandhikshan". Arati or prayer with lights takes place every day in the evening starting from Saptami through Navami. Finally on Dashami, i.e., the tenth day, the Puja ends and the image undergoes "Bisorjan" or immersion in water. This also marks the departure of the Goddess along with her four children to her husband's heavenly abode in Kailash. Traditionally, the married women bid Her farewell in a small ceremony known as "Sindur Khela" where they exchange Vermillon marks on each others foreheads and also on the forehead of Goddess Durga. Sweets are also exchanged among Bengalis along with "Kolakuli" or mutual hugging and this ritual is known as Bijoya. Bijoya ensures friendship among individuals who then collectively vow to spend the year ahead in Peace and Harmony and to ward off any evil or hardship." (Contributed by Biplab K. Das)

being agnostic my only interest in any cult is art...but this devi cult has been distorted out of proportions. .I cant sleep ..heavy duty bollywood aka devi music outside my Window

I love such painting's

this is a scene inside a Boniyadi (or old Bengali business families) family Puja in Kolkata or Patna. If you want to see family Pujas today,you have to go to a few homes in Kolkata and Dhaka. The same scene is done on mica paintings of the same or slightly later period. So appropriate for this period, Nirupama.