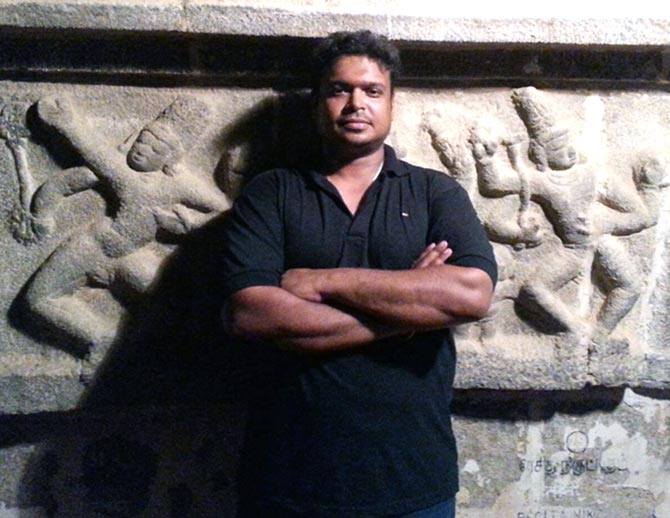 Article:
This hero stops the plunder of India's past
Rediff.com

'Imagine how secure are our seaports and airports that 10,000 objects can leave every decade and our custodians are not even aware?'

'This kind of targeted looting when thieves pick and choose the best of Indian art and steal on an industrial basis will eventually impoverish our great land.'

Vijay is a lone voice, screaming into the darkness, saying: 'Hey Prime Minister Modi, why don't you make the Tamil Nadu Idol Wing into a national police force to monitor and protect our cultural heritage across the country?'" says US-based antiquities blogger Jason Felch about his fellow blogger Vijay Kumar.

Vijay Kumar, who works in the shipping industry in Singapore by day, works usually late into the night, connecting with other bloggers, art enthusiasts and reporters, across the world, devoting valuable time to raising awareness about national treasures that are being smuggled out of India, and other countries, by unscrupulous art thieves.

Sadly, the money in the antiquities trade is all on the side of the ruthless raiders. There is hardly any money to support the handful of dedicated crusaders like Vijay Kumar who bravely try to draw adequate attention to the rampant robbery.

If you want to appreciate works of Indian art : Painting / Sculpture then go to different major cities in Europe n USA. Their museums are filled with centuries of Indian art objects. And it's not free, You have to pay for admission. How come such vast collection found their way oversees? A question all true Indians should ask!

Yes it deplorable that our historic civilisation is in museums abroad . Temples have been vandalised ., but in many cases ironic as it seems they are probably doing a better job at preserving some paintings than we are capable of doing at present it is a huge racket no doubt The govt must set up a proper dept to manage our museums and repatriate all our antiquities .

It is indeed such a paradox. What remains here deteriorates and what is stolen from here is treated with such respect. And the irony is that the thief takes better care of it than the owner himself.

I feel this has a lot to do with past dispensations .

The thieves of the antiques trade are none other than the well established politicians of yester years, starting with the nehru-gandhi family who have ransacked temple jewellery, statues/sculptures, fabrics, cookware in gold, silver, paintings, scrolls, plundered palaces et al. India is a land of many palaces - how come ? because they were built on the common man's back. ! The nehru-gandhi, is the number one family that are in this trade

This from a Museum for Asian Arts in Paris / France.

no wonder our artifacts are found across new york,london,paris,germany & other museums

When our corrupt political class is selling the country artifacts are nothing. If the money involved is huge the scam must have haopened with support from polticians and officials.

Bravo.... can u guide us to do same at other places?

Being i have visited Puri and Konark about ten times till now. From childhood i can feel important statues missing from sides of Konark. They say they are removed for repair maintenance. Is this true?

A friend of mine doing a PH.D at Kyoto University ( Japan) went to the Indian consulate in San Francisco, California. She said that the resources of the library was was not categorized or classified. Some books were soggy and had mold.Many valuable documents were stored in the basement, where they were stored in cardboard boxes, thus attracting moisture, rich growth of mold, fungus and the print was getting faded et, al - This is at the Consulate general's office in San Francisco. This was 5 years ago. The Government ( politicians and their generations - the scindias , the pilots, the pawars, the chauhans,) and their cronies are the thief of information and products - They keep most and then give iaway to their friends and relatives who are all over the media and sitting in "coveted" positions. It is a small circle and they keep the circle small and tightly knit. There is no paradox Rare Book Society of India. Only people like William Darymple has access to these information and so he writes books - No great shakes !

British are the biggest thieves of world.They have looted every dam place on face of this earth,in india they came ad Traders and looted the whole dam country.You can imagine the wast works of vedic Rishis which are on subjects like Genetic engineering, Quantum physics ...probably they will decipher them and will present them as one of thr own. Most of the idols stolen frm Khajuraho and Jain Temples are all sold to Christys (sourceWiki)

the indian government - the politicians are the biggest thief.

for repair and maintenance it need not be removed . Period. They are sold abroad by the government - the antiques criminals

WE know who the antiques thieves are - there is nothing to ask. When the government is the thief, who will book them?

Awareness must lead to action . Period.

Sad to hear this

Funding for Indian museums has been drastically reduced

Many indian politicians and the rich loot !!!!!!

Sad to hear.we see only plunderers around

Inside the Museum Guimet for Asian Arts in Paris / France .

Keep up the good work and share to create awareness. When I visited the museum at Indore in MP most of the antiquities were replaced by plaster of paris replicas of Jain Tirthankaras .These 1000 years old originals were lent for the infamous India exhibitions and never returned. You can imagine how much.the country lost from Jaipur Baroda etc

Perhaps the story of Gulliver & Lilliputs was derived/ inspired by this Indian painting?