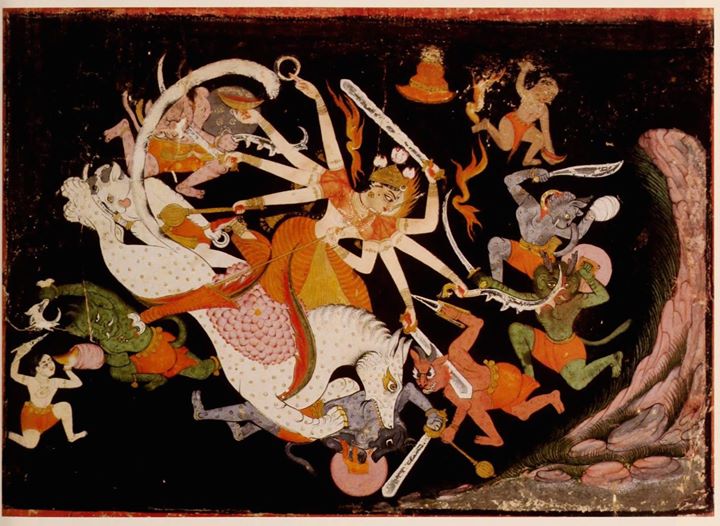 This painting, which originated in the western Indian state of Rajasthan, demonstrates the popularity of the iconic form of Mahishasuramardini across the subcontinent. In this colorful illustration, the many-armed goddess leaps from her feline vehicle and slices through the neck of the buffalo demon. Splashing out through the blood, the demon emerges in his human form, although green and with horns. Across South Asia, the water buffalo is thought to embody ignorance, laziness, and pollution; it is associated with blood and is the vahana (vehicle) of Yama, God of Death. Although domestic water buffalo have long provided milk and agricultural power, ancient texts describe them as a nondomesticated species, representing the chaos of wilderness and the absence of cosmic order.

The great Hindu goddess Durga, the demon slayer, keeps the world free from ills and afflictions. She is formidable; she fights with weapons of all the gods. Here, in one from a group of Durga images from the Kotah school that are unrivaled in Indian painting, she is shown as the slayer of the greatest of all demons, the buffalo, the embodiment of evil. As Durga leaps from her lion mount onto the back of the falling buffalo and spears the beast, his green demon shape emerges from the body of the dying animal. This is an act of grace that Durga performs at the edge of the world, where in the turquoise vastness framed by the glow of a sun that has risen over the nascent vegetation of the earth this primordial battle takes place.

- Stella Kramrisch, from Philadelphia Museum of Art: Handbook of the Collections (1995), p. 57.

Strange, the goddess here is shown riding on a horse? The animal doesn't at all look like a lion!

The head and mane are very similar to that of a horse. Yes, the paws are characteristic of a lion. May be it is a fusion of the two. Could it be that The Rajpoot warriors rode horses, hence, The goddess, seemingly a warrior in this situation, has been shown to ride an animal somewhat similar to a horse and also a lion, her original 'vaahan'?