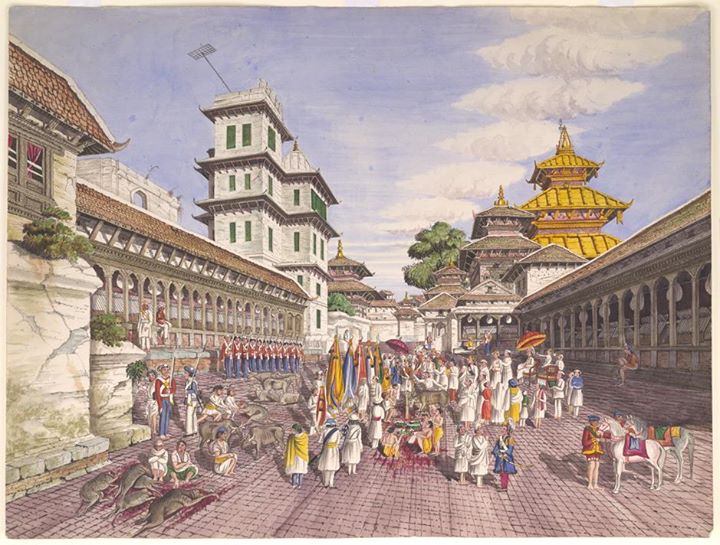 The Durga puja (Dussehra) is the festival commemorating the victory of the godddess Durga over the buffalo-demon Mahisasura and runs for ten days in the beginning of October. The artist, Dr Oldfield, was Residency Surgeon at Kathmandu from 1850-1863 and wrote in 'Sketches from Nipal, Historical and Descriptive...' (1880), "The ninth is the principal day of the festival, and on it the great slaughtering of buffaloes at the headquarters of regiments occurs...In the Kot, where seven regiments are quartered, the number of animals killed is very great...The King and principal Sardars are usually present at the Kot to witness the scene. About one hundred and fifty buffaloes are killed within the quadrangle of the building during the night and early morning. It is a curious sight. the bands are playing, guns firing, and the animals are brought up for slaughter one after another, without any attempt being made to clean the yard or wash away the torrents of blood which are streaming all over the place. The headless carcasses lie about in all directions until they are gradually removed by the different parties to whom they have been assigned." The Kot can be seen in this view as it is situated on the north-west corner of the Darbar (Royal Palace) and was used as the military council-chamber.

Beautiful painting of Kathmandu by and book in 'Sketches from Nipal, Historical and Descriptive...' (1880) Dr, Oldfield(2 volumes)

I wonder what that antenna like projection sticking out of the tall white building to the left was? My guesses?

For pigeons/other birds to sit?

Oh wow! That reminds me of Ahmedabads 'pols' where most communities have large bird feeders or just plain grooves in the walls for birds to roost. More so as there were very few trees within the communes and birds had no place to rest.

It almost looks like a photo. Our national academies of arts to do something to honour these gentlemen.