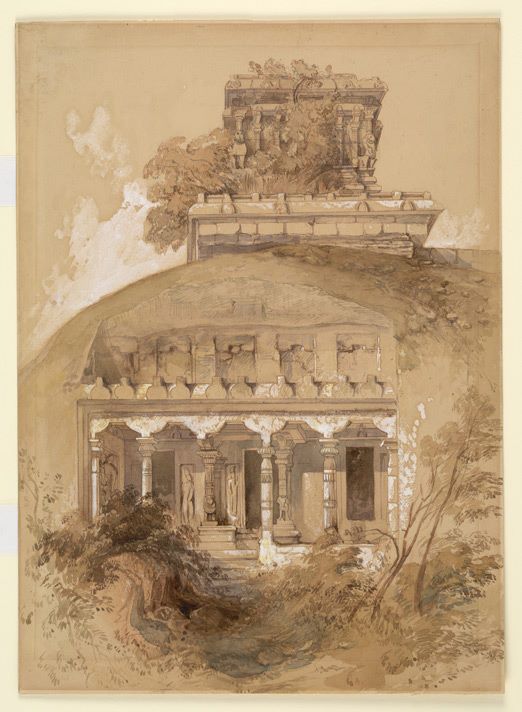 Digital Rare Book:
Illustrations of the Rock-Cut temples of India -
Selected from the best examples of the different series of caves at Ellora, Ajunta, Cuttack, Salsette, Karli, and Mahavellipore.
Drawn on stone by Mr. T. C. Dibdin, from sketches made on the spot in the years 1838-9
By James Fergusson (1808-1886) and Thomas Colman Dibdin (1810-1893)
Published by John Weale, London - 1845

This drawing is for Dibdin's lithograph which was reproduced as plate 17 in J. Fergusson's 'Illustrations of the rock cut temples of India', published in London in 1845. Mamallapuram, a tiny village south of Chennai (Madras), was a flourishing port of the Pallava dynasty from the 5th - 8th centuries. The site is famous for a group of temples, a series of rock-cut caves and monolithic sculptures that were most likely created in the 7th century reign of Narasimhavarman Mahamalla. The caves are all fronted with fine columns resting on seated lions, typical of the Pallava style. This view depicts the Mahishamardini Cave Temple which consists of a long verandah with fluted columns and three shrines. It is famous for the large sculpture panels on the side walls of the shrines, considered among the masterpieces of Pallava art.

Source: Copyright © The British Library Board

Does this cave temple still exist?

It does. Part of an entire complex that consists of some more caves, stone monuments and rock faces with carvings. Restored and maintained by the Archaeological Survey of India. Been there recently. Check the pic (same angle as the image in the post).

Thanks for your info. I'd like to see it one day. Is there any reason why the temple was built on the cave?

This is not a temple built in an existing cave. All this was solid rock. The temple was created by carving it out of this solid natural rock. This is rock cut architecture where rock that is not part of the structure is removed until the only rock left is the architectural elements of the excavated interior. After excavation it looks like a cave.

Sir the book is messed up.... the download link is either not good or might be some problem in scanning of the book. Please have a look.

Thanks for your explanation. It mus be an amazing structure.