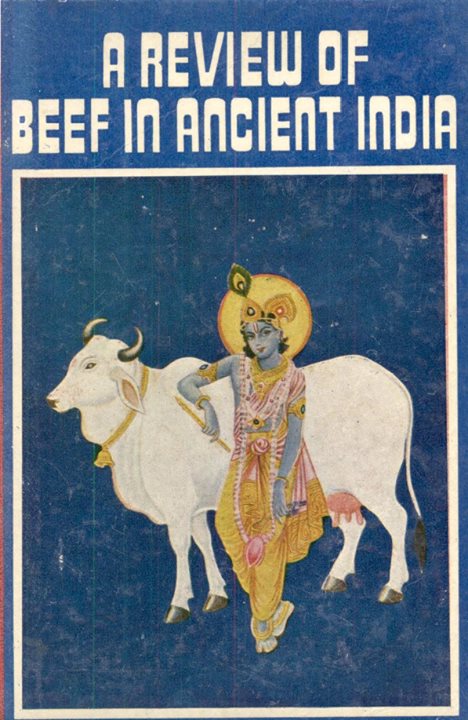 A book that refutes all beef eating theories in ancient India.

Absolutely love your page ...thanks a lot

Book is too good for knowing ancient indian views of beef and similar food items....but what a controversy on it.....the front page of book on beef review is headed by Lord Krishna. One who is known as "GAU Brahman Pratipal". One who saviour of Cows and Brahmins.

I agree that the choice of the picture is absolutely inappropriate. But then that is the cover page of the book!!

As usually done in Indian fields of works....creating controversies...☺☺

Irrelevant book cover for this book

My nanaji, late Lakpat Rai was very involved with publication of Kalyan. He had taken sanyas and lived in Gorakpur with Poddarji. We visited him many times as children.

that is great to know about Lakhpat Rai ji. My Mother was a subsriber since 1933, read them to all of us

That is very good to know babaji. My mother used to read it to us too and always showed us the beautiful pictures/paintings in the beginning of each issue. She would cut out and keep the most beautiful of them. She had a collection of these. She knew who the earlier painters were. She was a life time member of Kalyan.

First I kindly apologize for the comment which i mad on the book title and image.....i have got indescribable knowledge from the book. Which are as follows....please have a deep.look in the book and try to.understand it...... Extremely beautiful and knowledgeable section with proofs provided by vedas, upnishads and samhitaas which virtually, directly-i directly, wholly-partially, by ordering or allowing ahimsa and hence ban & stop on cow slaughter, hence also punishing the person who does so from the ancient times namely vedic, samhiitic and till krishna janma kaal. The clearings done about "Ashwamedh and Gaumedh", the rule of... "If you kill a animal for your pleasure, it will kill you in its next birth for HIS pleasure". "Ban of Beef in Islam". One of the best part seems to.me is the statement given by Lord Krishna," eating of meat is VARJYyA (prohibited) but still if a person is unable to understand that and loves and indulge violance and killing then he must do it by offerening it to yagna only. (Meaning there is no way to teach a person who believes only in violence and wicked behavior)". Examples of Manu-smruti sayings" a teacher, father, mother, brahman, cow and ascetic should not be killed". The explanation done for purva altar and uttara altars are extremely rare and knowledge providing issues. Variouse clearings made o. The same which had been happened for Varnavaad (castism) as there was no castism (lower or upper cast in reference to untouchable and narrow minded humanity) in vedas,, but as there are no records that by which time these principles entered in ved is a mystery and hence created all this havoc, the same is for no preachings have been made in vedas for cow or any meat but due to due to some violence loving people and kings the principles have been entered on name of Shastra. Sanskrut being a mighty language and mother of majority of languages spoken is also a hard to understand Literature too. As one word having lots of meanings for example "क"is water, door, main gate "सारंग" is peacock, king, lion ,snake, pot filled with water, musical raaga, lightening of clouds, etc have created this misunderstanding, also the shallow knowledge of so said scholars and words had caused this misshapen.

Thanks for the information, hope people will learn & understand Hindutava