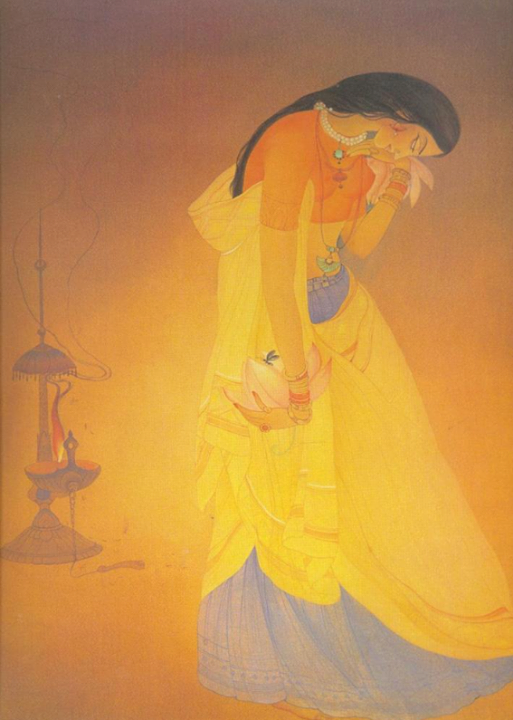 Abdur Rahman Chughtai (1897–1975) was a painter and intellectual from Pakistan, who created his own unique, distinctive painting style influenced by Mughal art, miniature painting, Art Nouveau and Islamic art traditions. He is considered 'the first significant modern Muslim artist from South Asia',[1] and the national artist of Pakistan. He was given the title of Khan Bahadur in 1934, awarded Pakistan's Hilal-i-Imtiaz in 1960, and the Presidential medal for Pride of Performance in 1968.

Chughtai's year of birth is given variously as 1894, 1897 and 1899, but the official family website has it as 21 September 1897.[2] He was born in Lahore in the area known as 'Mohalla Chabuk Sawaran', the second son of Karim Bukhsh, in a family descended from generations of craftsmen, architects, and decorators. Chughtai briefly learnt naqqashi from his uncle Baba Miran Shah Naqqash at a local mosque.[2] After completing his education at the Railway Technical School, Lahore, in 1911, Chughtai joined the Mayo School of Art, where Samarendranath Gupta, a pupil of Abanindranath Tagore was Vice-Principal. After leaving the school, he made a living for a while as a photographer and drawing teacher. He eventually became the head instructor in chromo-lithography at the Mayo School.

Chughtai's early watercolours take off from the revivalism of the Bengal School of Art – his Jahanara and the Taj, for instance, shows the influence of Abanindranath's The Last Moments of Shah Jahan.[3] By the 1940s he had created his own style, strongly influenced by Islamic art traditions, but retaining a feel of Art Nouveau. His subject matter was drawn from the legends, folklore and history of the Indo-Islamic world, as well as Punjab, Persia and the world of the Mughals. (Wikipedia)

Kul deep ji are you aware that chughtai was real brother Of famous urdu.writer Is mat chughtai.?

There is a rare Divan ghalib Illustrated.by chughtai.published by TAJ Company lah ore. In 1945. This book contain 156 paintings based on ghazal of Ghalib