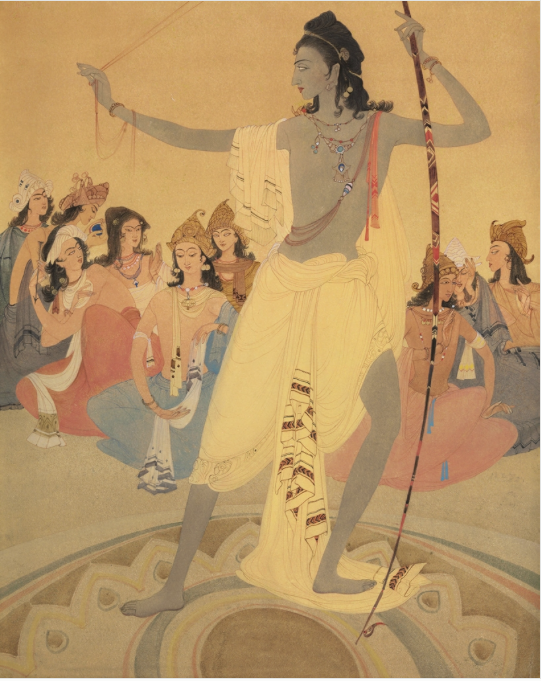 This is beautiful. Thanks for introducing me to a new artist, RBSI!

This is 100% Lord Rama's painting.. This incident in Ramcharitmanas is known as Dhanush Yajna... it was when Lord Rama... broke the Bow to marry Sita...

It is not Arjuna's painting..!

Besides Rama is dark skinned unlike Arjuna.

Anjali Singh some people are open n has the guts to take in whatever comes in.

no, this is Lord Rama, not Arjuna. Arjuna was fairer.

Chugtai (b 1897) is in fact an Indian artist in true tradition. He was 50 when India was divided in 1947. He spent rest of 28 years in newly created Pakistan (till 1975). Chugtai's style is rooted in Bengali School. Chughtai studied painting at the Mayo School of Art in Lahore in 1911. His teacher was Samarendranath Gupta, himself a student of Abanindranath Tagore. The Abanindranath Tagore (1871 - 1951) was the pioneer and leading exponent of the Bengal School of Art which flourished between 1905 and 1920. In his paintings, he sought to counter the influence of Western (European) art as taught in art schools under the British Raj, by modernizing indigenous Moghul and Rajput traditions. His work became so influential that it was eventually accepted and regarded as a national Indian style.

Excellent work. As always the Brits provide wrong depiction and my sincere appreciation for their great contribution towards creating Pakistan and woes of our modern times.

Chughtai is the artist... the depiction in the painting is not of Arjun but Lord Rama.... !

I think this is raam and not arjun

You are right. I too was surprised with the Christies description. Will correct it.

he was a master. so delicate.

how to understand whether it's arjuna or rama except the description given in the painting? there is no strong indication for that as both were engaged in the act of the bow and both are dark complexioned people... arjuna was not fair please guys go through the mahabharata... Rare Book Society of India

the only other possibility is to look at it the way that they were dressed as ascetics during that time but hardly most painters kept on that specification about the pandavas ... if the princely attire is kept in mind only than can it suffice to be rama but not by complexion

Arjunas depiction with bow is at dtaupadis swaymbar with fish mounted upward and arjun seeing downwards in oil .