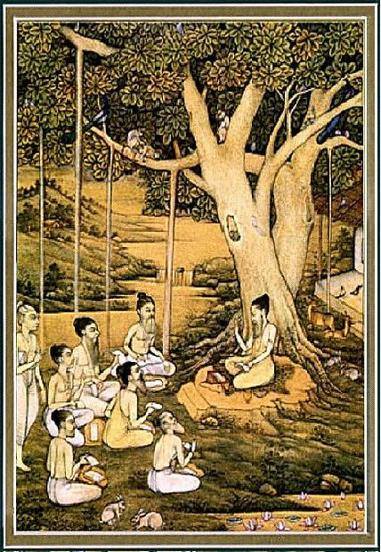 The Nyāya Sūtras are an ancient Indian text of philosophy composed by Akṣapāda Gautama (also Gotama; c. 2nd century CE). The sutras contain five chapters, each with two sections. The core of the text dates to roughly 150 CE, although there are significant later interpolations.

The Nyaya is sometimes called Tarka-Vidyā, the science of debate, Vāda-Vidyā, the science of discussion. Tarka is the special feature of the Nyāya. Thus some of its features and categories are better understood from that perspective. Gautama is sometimes given the honorific titles "Akṣapāda" (probably in the sense "having his eyes fixed in abstraction on his feet") and "Dīrghatapas" ("performing long penance"). He is also sometimes accorded the religious titles "Ṛṣi" or "Maharṣi".

The Nyaya Sutra supports a five-part syllogism, widely followed in the Indian tradition:

This hill is fiery (pratijñā: a statement of that which is to be proved).
Because it is smoky (hētu: statement of reason).
Whatever is smoky is fiery, as is a kitchen (udāharaṇa: statement of a general rule supported by an example).
So is this hill (upanaya: application of the rule of this case).
Therefore this hill is fiery (nigamana: drawing the conclusion).
The characteristic feature of the Nyaya syllogism is its insistence on the example, which suggests that the Nyaya logician wanted to be assured not only of formal validity but also of material truth.