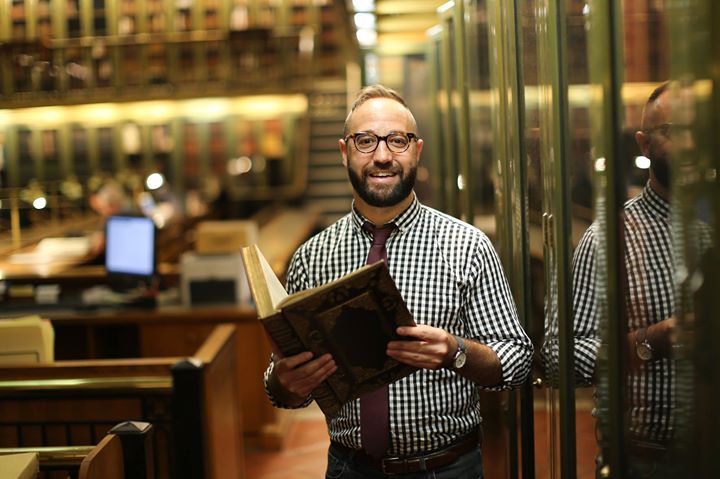 “I’m a rare book librarian. I get to touch books every single day. My colleague and I have a joke that we are Defenders of Wonder. A physical book assigns a sense of reverence to the content inside. It’s the same feeling you get when you look at a painting or hear a piece of music. And I think that’s something worth defending. And just like a book gives reverence to its content, I think the library gives reverence to books. The building itself is a masterpiece. So many famous thinkers have come here to study and write. Just being here connects you to that lineage.”

Thanks to Ratnesh Mathur for sharing this.

This is the Rare Books & Special Collections Librarian at the main branch of the New York Public Library.

Thank you. I want to know a book of Arthur Conan Doyle. It is about art.

As a Librarian I had wonderful time with rare books in Anthropological Survey and also in Asiatic Society at Kolkata.

Arthur Conan Doyle Other works Doyle's first novels were The Mystery of Cloomber, not published until 1888, and the unfinished Narrative of John Smith, published only in 2011.[32] He amassed a portfolio of short stories including "The Captain of the Pole-Star" and "J. Habakuk Jephson's Statement", both inspired by Doyle's time at sea, the latter of which popularised the mystery of the Mary Celeste[33] and added fictional details such as the perfect condition of the ship (which had actually taken on water by the time it was discovered) and its boats remaining on board (the one boat was in fact missing) that have come to dominate popular accounts of the incident.[33][9] Between 1888 and 1906, Doyle wrote seven historical novels, which he and many critics regarded as his best work.[26] He also authored nine other novels, and later in his career (1912-1929) five stories, two of novella length, featuring the irascible scientist Professor Challenger. The Challenger stories include what is probably his best-known work after the Holmes oeuvre, The Lost World. He was a prolific author of short stories, including two collections set in Napoleonic times featuring the French character Brigadier Gerard. Doyle's stage works include Waterloo, the reminiscences of an English veteran of the Napoleonic Wars, the character of Gregory Brewster being written for Henry Irving; The House of Temperley, the plot of which reflects his abiding interest of boxing; The Speckled Band, after the short story of that name; and the 1893 collaboration with J.M. Barrie on the libretto of Jane Annie. https://en.wikipedia.org/wiki/Arthur_Conan_Doyle

This is so wonderful to know.... With Neerja Lal

Is there any book he wrote regarding "history of art"? Thank you for response. I think this book is out of print.

No book by Arthur Conan Doyle, on art. His grandfather & his father's brothers were famous cartoonists/ artists. Many publications including Punch magazine have their works. ( https://en.wikipedia.org/wiki/Arthur_Conan_Doyle_bibliography )

Reflects an aesthetic sense of rare taste of reverence to the content that is hidden inside our mind, you have nourished like an artist !

I cannot resist myself without sharing "rarebook" being a professional librarian its my duty to educate the world about the unknown things and make the people to know the history very deeply.

How can I become member in this Society?, I have several anciant books here in Gokarn

................................Pulled my comments out to save you, the readers, from any botheration. .I have a beard, yet not a book. How much weird! .........A little fun apart, I love more to be with the uncommon words than with the more common of a cascading rush of the general stuff. A new word, without knowing its meaning for use in a sentence, I instantly feel as if I'm standing right before a bright man with a stiff upper lip. Yet, with an instant ping from my mind, I rush to the dictionary to eliminate the hoariness of the moment. Only in the present times---as the lap-top has landed a bit late in my empty lap---I have slowly become a La-To crazy only recently. Wonder of wonders, I can type as fast, if not faster, with my sole fore-finger as most of the others would with their all-ten in action. ................I still don't know what am I doing here. What I am here for. Call me a nut not, please! Like · Reply ·

Am a Doyle fan. His act of destroying Holmes was an act of self liberation.