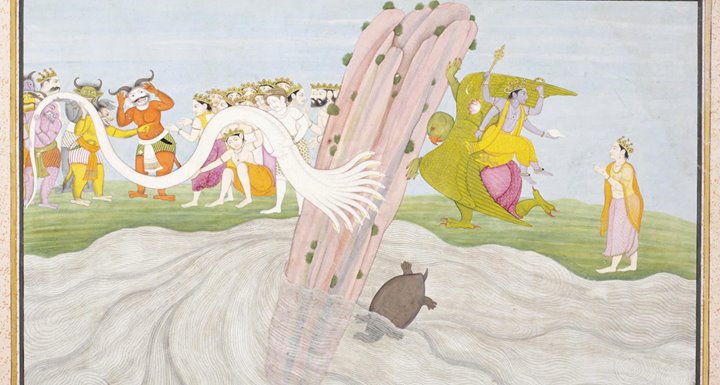 A folio from a Bhagavata Purana series: The Churning of the Ocean, or Vishnu as Kurma Avatar

Attributed to the first generation after Manaku and Nainsukh of Guler, circa 1780-90

Gouache and gold on paper, pink border with dark blue and gold margins, cover paper with numeral (37) in nagari script, in mount

This illustration depicts Vishnu in his second avatar as Kurma or the turtle. The episode takes place in the Bhagavata Purana and is associated with the curse of the sage Durvasa who brought a fragrant garland for Indra, the king of the gods. Indra, in an inebriated condition, hung the garland on the trunk of his elephant, Airavata, who trampled it under his feet. Seeing this, Durvasa flew into a rage and cursed Indra that he would lose all his splendour. As a consequence, Lakshmi, the goddess of prosperity and fortune disappeared from the abode of the gods and gloom descended upon earth. The gods led by Indra went to Vishnu for help. Vishnu explained that since Lakshmi had dissolved herself into the ocean of milk, she would have to be churned out. Indra is depicted on the right, with his hands folded, appealing to Vishnu who is seated on his large bird-mount, Garuda. The churning of the ocean, however, could not be possible without the help of the asuras or demons. So the gods and the demons decided to put their differences aside and come together to churn the ocean. Mount Meru, the abode of Brahma, was used as the spindle for the churn. Vishnu took the form of a turtle to prevent the mountain from sinking. Vishnu's serpent Sheshnag was wound around the mountain. The asuras and the gods are debating over which side should hold the serpent's tail and which side should hold his multiple heads. Shiva wearing his tiger skin and multi-headed Brahma are also depicted standing amongst the gods. The ocean was churned for a long time and and from it finally emerged Lakshmi with treasures representating power, pleasure and prosperity but also pollution as an unwelcome component.

The large expanse of grey ocean with its swirling whirlpools is noteworthy as this is usually seen in pictures of Garhwali origin. For another Guler painting, depicting Vishnu slaying Madhu and Kaitabha, circa 1781, from a Markandeya Purana series, with similar treatment of the ocean, see F.S. Aijazuddin, Pahari Paintings and Sikh Portraits in the Lahore Museum, London 1977, no. 41(iii), pg. 29.

Guler, a small state to the south west of Kangra, had been crucial in the development of painting in the Punjab Hills. Raja Dalip Singh (1695-1741) was an active patron of the arts and commissioned a talented atelier of artists in Guler including Pandit Seu, father of Manaku (1700-1760) and his younger brother Nainsukh (1710-1778). Nainsukh was one of the pre-eminent artists of Pahari painting and with Manaku established important studios in the 18th century not only at Guler but at the courts of Jammu, Basohli, Kangra; a tradition that was continued by future generations of sons, nephews and grandsons. The family style of the first generation after Manaku and Nainsukh came into its own in the second half of the 18th century and when fully formed was established and admired amongst all styles then prevalent in the Pahari region. Some of the greatest series in Indian painting including the 'large' Guler-Basohli Bhagavata Purana series of circa 1760-65 (see lot 187), the (second) Guler Gita Govinda series of circa 1775, the Guler Bhagavata Purana series of circa 1780, the (second) Guler Ramayana series of circa 1780 and the (first) Guler Bihari Satsai series of circa 1785 can now be identified as the work of the first generation after Manaku and Nainsukh. By the last quarter of the 18th century, the family had grown considerably: Fattu and Khushala were sons of Manaku; Kama, Gaudhu, Nikka and Ranjha were the sons of Nainsukh. There was evident need for them to move out of their home in the state of Guler. Nainsukh had already left around 1740 and worked in Jasrota before moving on to Basohli where he was later joined by Fattu and Ranjha. The artists are thought to have moved around the Pahari states and attached themselves to different royal houses depending on patronage. Although attributions to artists have been suggested, it has been difficult to assign particular series to individual names. Uncles, nephews, cousins are thought to have worked together on paintings and series at different places. No signed works or colophons have been found so far but a discernable family style is quite evident in the dispersed folios.