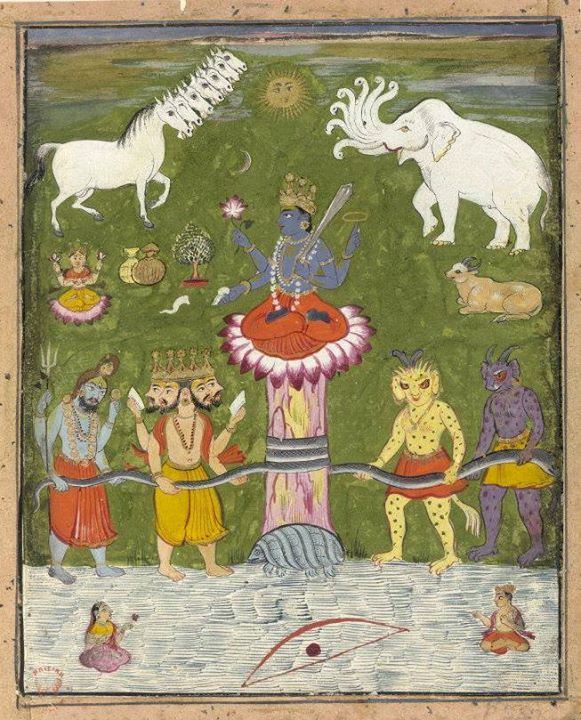 Samudra Manthan scene with Vishnu as Kūrma; single-page painting mounted on an album folio. Central blue figure, Kurma, sits cross-legged on Mount Meru holding various items in each of his four hands. On the left stand the two devas, one a four-armed blue being with a spear and the other a four-armed, four-headed crowned being. All four figures hold Vasuki, the king of serpents. On the right stand the two demons, one yellow and one blue. At the bottom of the mount sits Kurma in turtle form. Uchhaishravas, the divine seven-headed horse, at top left. Airavata, the pluritrunked elephant, at top right. Kamadhenu, the wish-granting cow; Parijat, the perpetually flowering tree; the halahala poison; Shankha, the magic conch; the sun and the Chandra moon; all in the middle ground. At lower edge, in the ocean of milk, float two deities and the magic bow. Framed by plain beige border with black outlines; page cut before mounted into album. Album contains 67 Deccani paintings, mostly depictions of named individuals, along with some Hindu gods and goddesses.

Ink, opaque watercolour and gold on paper. Album bound in blue-green leather and stamped with Sloane's gilded armorial on front and back cover.

The symbology is so beautiful. In a way, it represents the processes of preservation, creation and destruction, with the obvious emphasis placed here upon the preservation aspect. :)