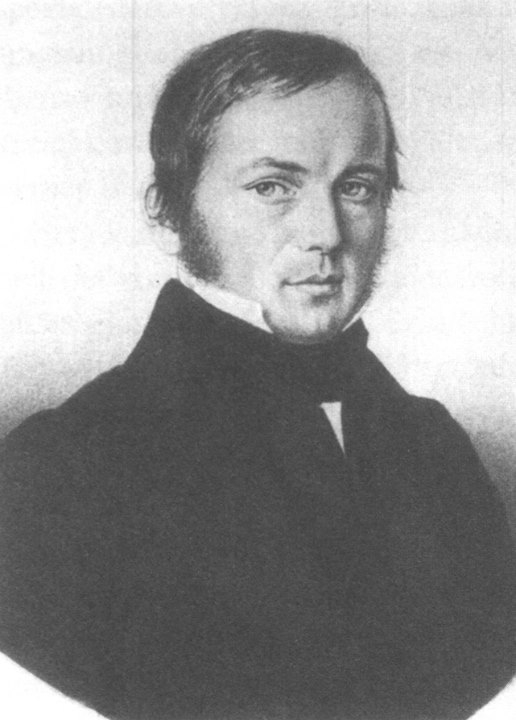 Rev. Dr. Hermann Gundert (Stuttgart, 4 February 1814 – 25 April 1893 in Calw, Germany) was a German missionary, scholar, and linguist, as well as the grandfather of German novelist and Nobel laureate Hermann Hesse. Gundert compiled a Malayalam grammar book, Malayalabhaasha Vyakaranam (1859), a Malayalam-English dictionary (1872), and contributed to work on Bible translations into Malayalam. He worked primarily at Thalassery on the Malabar coast, in Kerala, India. Gundert also contributed to the fields of history, geography and astronomy.

Having been engaged as private tutor in Calcutta (Kolkata), India, he prepared for this job in England. In April 1836 he left Bristol with the party of his employer. While traveling on the ship he concentrated on learning Bengali, Hindustani and Telugu and taught these languages to his fellow passengers. Instead of Calcutta the party reached Madras (Chennai) in July 1836 and settled there. Gundert immediately started learning Tamil. Soon he was giving a duty in Tirunelveli, and after some time in Chittoor (nowadays Andhra Pradesh). There he married Julie Dubois in July 1838. She originated from French speaking Switzerland and had come to India in the same party. After marriage the two left for Tirunelveli, and on the way there were invited to join the Basel Mission in Mangalore. They accepted, and en route Gundert left Tamil drawing ups with a printer in Nagercoil. In Trivandrum (Thiruvananthapuram) Hermann Gundert had an audience with His Highness Sree Swathi Thirunal Maharaja, the ruler of Travancore. Most probably it was here he heard Malayalam for the first time.

In November 1838 Gundert and his wife reached Mangalore. From there he visited Kannur, Thalassery and the cinnamon plantation near Anjarakandy. After a bungalow on Illikkunnu near Thalassery had been offered to the Basel Mission on condition to establish a mission station there, the Gunderts moved there and took up work in April 1839. In August 1839 Gundert stated that he had studied Malayalam intensively and that he had established the first Malayalam School in the veranda of the bungalow in May. At the same time his wife started the first girls' institute with boarding. In the following months Gundert opened Malayalam schools in Kadirur, Thalassery Fort, Mahe, and Dharmadam. Regularly he visited all these schools and invited the teachers to Illikkunnu for further education. At times Gundert had five Pandits in his house, discussing old Indian history, philosophy and religion and studying the classical Indian literature. At his numerous visits to the villages around Thalassery Gundert got in close contact with the people, collected as many words, phrases and proverbs as possible and spread the Gospel. During this period he published around thirteen books in Malayalam including a translation of the Bible –the Old Testament from Hebrew and the New Testament from Greek. The lots of material – old Malayalam documents and scriptures from Thalassery and other places in Malabar – which Gundert had collected he later gave to Tuebingen University, Germany. There they were catagolized by the Malayalam scholar Dr. Scaria Zacharia who published them in Kerala : Hermann Gundert Series 1991-92; Tuebingen University Library Malayalam Manuscript Series 1994-96. In the beginning of 1857 the Government appointed Gundert as the first Inspector of Schools in Malabar and Canara – from Kozhikode in the South till Hubli in the North, from Thalassery to Manantavadi. He appointed teachers, wrote textbooks for schools, colleges and the newly established Madras University and also compiled examination papers. In Kerala Gundert is venerated for his deep interest in the local culture as well as the development of Malayalam language, for compiling grammatical books for school starters as well as for University level. These grammars were the prominent non-Sanskrit-based approaches to real Indian grammar. Gundert considered Malayalam to have diverged from Proto-Tamil-Malayalam, or Proto-Dravidian. Apart from the early inscriptions found on copper and stone, Gundert traced Malayalam to the Rama Charitam, a poem predating the Sanskrit alphabet. Gundert is held in high regard to this day among linguistic experts in Kerala for the high scholastic aptitude exhibited in his work. His dictionary has been described as “monumental” in a review of the work on Dravidian languages.

n Kerala, he took a deep interest in the local culture and the Malayalam language, attempting a systematic grammar of the language. This was one of the prominent non-Sanskrit-based approaches to Indic grammar. Gundert considered Malayalam to have diverged from Proto-Tamil–Malayalam, or Proto-Dravidian. Apart from the early inscriptions found on copper and stone, Gundert traced Malayalam to the Rāma Charitam, a poem predating the Sanskrit alphabet.

Gundert is held in high regard to this day among linguistic experts in Kerala for the high scholastic aptitude exhibited in his work. His dictionary has been described as "monumental" in a review of the work on Dravidian languages.

I know understand why Herman Hesse had interest in India! It is very exciting to imagine the Europeans lived in India at the time. How was life at the time? How was the people? etc...

Not so exciting at all if you were Indian! Europeans still live in India, btw.

The Europeans who lived in India at the colonial time had a good life, I guess, that's what I watched in some film illustrations.