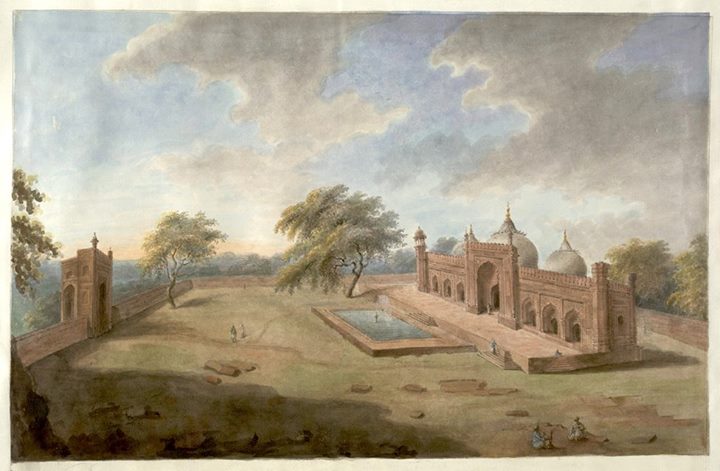 Watercolour of Aurangzeb's Idgah at Mathura from 'Views by Seeta Ram from Tughlikabad to Secundra Vol. VIII' produced for Lord Moira, afterwards the Marquess of Hastings, by Sita Ram between 1814-15. Marquess of Hastings, the Governor-General of Bengal and the Commander-in-Chief (r.1813-23), was accompanied by artist Sita Ram (flourished c.1810-22) to illustrate his journey from Calcutta to Delhi between 1814-15.

Mughal Emperor Aurangzeb (r.1659-1707) ordered the construction of the red sandstone mosque for the celebration of the Muslim festival of Id [Idgah] in 1670. The mosque was built on the site of an earlier temple, Keshava Deva. Mathura, on the banks of the river Yamuna 150 kms south of Delhi, is a sacred city for Hindus. Mathura became the centre for the Vaishnava cult by the 15th century and it is celebrated now above all as the site which Hindu mythology designates as the birthplace of Krishna, the popular incarnation of Vishnu. Inscribed below: 'Nowrung Padsha's Musgid at Muttra.'

And they say that Aurangzeb was a good ruler

Aurangzeb was the most intolerant emperor

you have now opened the flood gates.God help us.