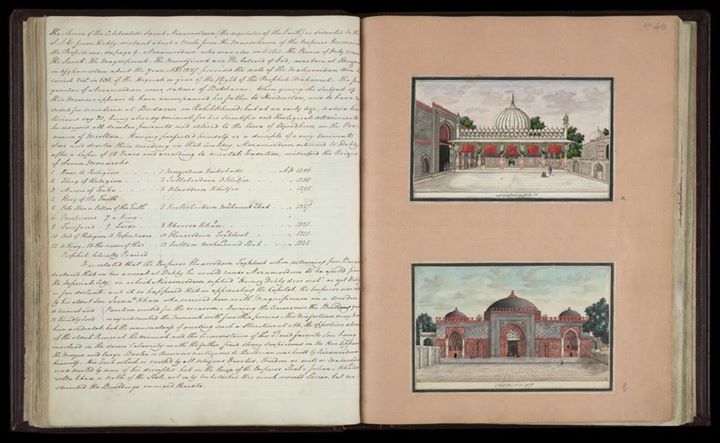 [From 'Reminiscences of Imperial Delhi’, an album consisting of 89 folios containing approximately 130 paintings of views of the Mughal and pre-Mughal monuments of Delhi, as well as other contemporary material, with an accompanying manuscript text written by Sir Thomas Theophilus Metcalfe (1795-1853), the Governor-General’s Agent at the imperial court. Acquired with the assistance of the Heritage Lottery Fund and of the National Art-Collections Fund.]

The shrine of the celebrated Saint Nizamoodeen (the Regulator of the Faith) is situated to the S.S.E. from Dehly distant about a mile from the mausoleum of the Emperor Hoomaioon the Propitious - see page 9 [f. 12]. Nizamoodeen who was also entitled the Prince of Holy Men, the Saint, the Magnificent, the Munificent and the Beloved of God, was born at Ghuznee in Afghanistan, about the year AD 1237, provided the date of the Mahomedan era be correct viz. in 635 of the Hegirah or the year of the flight of the Prophet Mahomet. The progenitors of Nizamoodeen were natives of Bokhara. When young the subject of this memoir appears to have accompanied his father to Hindoostan, and to have resided for sometime at Budaoon in Rohilkhund: but at an early age, native historians say 20, being already eminent for his scientific and theological attainments he resigned all secular pursuits and retired to the town of Ujoodhun in the Providence of Mooltan. Having perfected himself as a disciple of a very eminent Seer and devotee then residing in that country, Nizamoodeen returned to Dehly after a lapse of 18 years and according to oriental tradition, witnessed the reigns of the Seven Monarchs.
(1) Moizoodeen Kaikobad AD 1286
(2) Jullaloodeen (3) Khiljee “ 1288
(4) Alaoodeen Khiljee “ 1295
(5) Kootooboodeen (6) Mobaruck (7) Shah “ 1357
(8) Khoosro (9) Khan “ 1321
(10) Ghiasoodeen (11)Toghluck “ 1321
(12) Sooltan (13) Mohumud Shah “ 1325
(1) Dear to Religion (2) Glory of Religion (3) Name of Tribe (4) Glory of the Faith (5) Pole Star or Pillar of the Faith (6) Prosperous (7) a King (8) Fairfaced (9) Lord (10) Aid of Religion (11) Proper name (12) a King (13) The name of the Prophet, literally Praised
It is related that the Emperor Ghiasoodeen Toghluck when returning from Bengal declared that his arrival at Dehly he would cause Nizamoodeen to be ejected from the Imperial City, on which Nizamoodeen replied “Hunoz Dehly door ust,” ‘as yet Dehly is far distant.’ and it so happened that on approaching the capital, the Emperor was met by his eldest son Jouna Khan (‘Ancient Lord’) who received him with Magnificence in a wooden pavilion erected for the occasion. During the ceremonies the building gave way and crushed the Monarch with five other persons. This misfortune may have been accidental but the unusualness of erecting such a structure at all, the opportune absence of the eldest Prince at the moment and the circumstance of the 2nd and favorite son being involved in the same calamity with the father, fixed strong suspicions on the Heir Apparent. The Mosque and large Baolee or Reservoir contiguous to the shrine was built by Nizamoodeen himself. His tomb which is visited by all religious devotees, Hindoos as well as Mahomedans, was erected by some of his disciples: but in the reign of the Emperor Shah Juhan Khuleeboolla Khan (‘Friendly Lord’), a noble of the state, not only embellished this much revered shrine but constructed the buildings annexed thereto.

[The shrine of Nizamuddin Auliya. Nizamuddin Auliya died in 1325. The original tomb was repaired by Feroz Shah Tughlaq (r.1351-88), which has disappeared. The present structure, was built by Faridum Khan in 1562-63, and was added to and repaired by several people. It consists of a small-square chamber, with verandahs on all four sides. The roof is surmounted by a white marble dome, with vertical black stripes.]
Inscribed: naqsha-i dargah-i hazrat-i Nizam al-Din sahib.
[The mosque beside the shrine of Nizamuddin known as the Jamaat Khana mosque. It was built in 1325 by Khizr Khan, the son of Alauddin Khalji (r.1296-1316), and is the oldest building in the Nizamuddin area. The mosque built of red sandstone, stylistically resembles the Alai Darwaza, near the Qutb Minar.]
Inscribed: naqsha-i masjid nazd-i maqbara-i hazrat-i Nizam al-Din sahib.