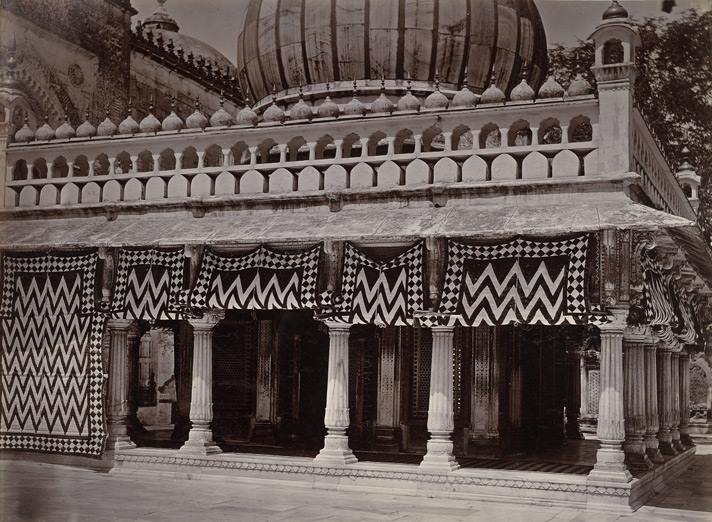 Photograph of Nizam-ud-Din’s Tomb in Delhi from the Macnabb Collection, taken by G.W. Lawrie and Company in the 1890s. Shaikh Nizam-ud-Din Auliya (1236-1325) of the Chishti order was Delhi’s most revered Muslim saint and his tomb or dargah is still a site of pilgrimage. It stands within the courtyard of the Jamaat Khana mosque (1325). The tomb was originally erected in the year of the saint’s death and was restored and remodelled in later centuries. It is a small square chamber with verandahs on all four sides and walls consisting of perforated marble screens (jalis) supported by pillars with intricately carved geometric patterns. The present structure mainly dates from 1562 during the reign of the Mughal emperor Akbar when a noble of his court, Farid al-Khan, reconstructed the tomb, adding an octagonal drum and dome. The tomb of the saint in the interior is enclosed by a marble rail and covered with a canopy of mother of pearl provided by Shaikh Farid Bukhari in 1608-09. From the 14th century the area around the dargah became a burial ground for Muslim nobility and there are a number of other tombs in the vicinity of the shrine, including those of Shah Jahan’s daughter Princess Jahanara and the 14th century poet Amir Khusrau, who was a disciple and friend of the saint. This is a close view of the tomb with geometric patterned hangings shading the verandah.

So nice of you