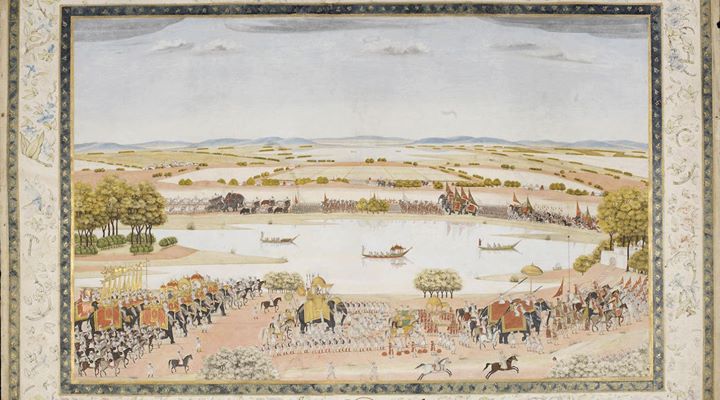 Image:
An Imperial Mughal procession in an extensive landscape
Lucknow, circa 1770

It is possible that the painting depicts a Mughal army marching into battle with the English, and therefore probably depicts Shah 'Alam II (reg. 1760-88), the first Mughal Emperor to leave Delhi. Another possibility is that the painting depicts the Nawab of Oudh, Shuja-ud-daula (reg. 1754-75). The Emperor, or Nawab, can be seen seated in a splendid howdah of gold on a large elephant with a gold saddle-cloth to the centre foreground of the painting. A second row of elephants behind carry banners and spectacular animal standards, including a fish standard (mahi o maratih, fish and dignities), the Imperial Mughal insignia, with the head made of gold and the body of gold brocade designed to billow in the wind. Amongst the other standards that can be seen are the Lion Standard, the sign of the King, the Hand or Palm Standard, the Round Ball or Orb which represents the sun, and the Scales of Justice, at the extreme right. There is a wealth of anecdotal detail, such as the trumpeters seen in the lower right corner, who have puffed-out cheeks.

Set within a vast landscape that stretches into the far distance in the manner characteristic of Lucknow painting of the period, with an injection of European techniques of recession and aerial perspective. This painting is a rare example of the use of a mixed media technique: the figures are painted in the traditional Indian technique of opaque watercolour on paper, heightened with gold, while the landscape, in particular the receding sky in the upper half of the painting is rendered with English watercolour. Robert Skelton has commented that the smooth curving grey clouds are in the style of Mihr Chand, the leading artist under Shuja-ud-Daula, circa 1750-1760 at Lucknow.

"..... the first Mughal Emperor to leave Delhi"? This is incorrect. Aurangzeb had followed his son Akbar's Rajputana campaign from Ajmer. Though I dont know but I feel many other Mughal emperors must have made the pilgrim to Ajamer.

But that was before he became the Emperor

Sir, I think he moved his court to Aurangabad after the rebellion of his son Akbar, and breathed his last also in Ahmednagar perhaps. Maybe stayed in Burhanpur also for some time.

Yes you are right. I saw Deccan and all I thought of was his viceroyalty