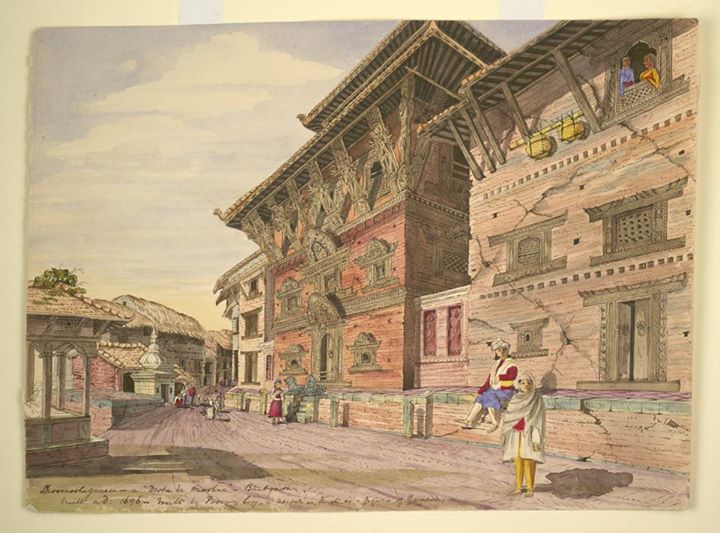 Bhaktapur, the 'City of Devotees' is 11 km east of Kathmandu and 10 km north-east of Patan and is the youngest of the three former city-states of the Kathmandu Valley. Bhaktapur was founded in the 9th century and rose to prominence under the Malla dynasty. It remained a valley kingdom until the late 15th century when it became a sovereign state, together with Kathmandu and Patan. All three have similar architecture and were built around Durbar Squares containing Palace and Temple complexes. The artist, Dr Oldfield, was Residency Surgeon at Kathmandu from 1850-1863. After his death his family published, in two volumes, his 'Sketches from Nipal, Historical and Descriptive...' (1880), which described life in the court of the Maharajah Jung Bahadur and also contained descriptions of Buddhist architecture, together with illustrations of the latter from Oldfield's own drawings.

I don't see any figure of ganesh

We loved our visit to Bhaktapur many years ago. Were these beautiful buildings spared from earthquake damage?

Is this still there after the earthquake ? Must be unharmed due to wooden construction and God's blessings.