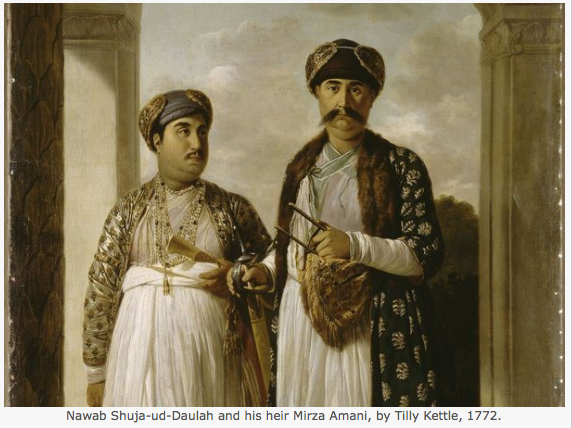 Article:
Nawabs and their love to see self on canvas
By Shailvee Sharda
TNN | Nov 2, 2014

LUCKNOW: Narcissism omnipresent now in the form of 'selfies'—pictures people click of themselves—was manifest in the form of portraits the high and mighty got painted of themselves for posterity. Nawabs of Avadh contributed immensely to the Company School of Painting, a genre of portraits during the British Raj, providing opportunity for many artists. They created vivid testimonies of the socio-cultural practices of the period.

The nawabs' patronage to painters became a tradition. At a workshop in the city, Indian and Bangladeshi painters drew inspiration from 'How nawabs patronised the palette'.

Tilly Kettle (1735-86) was a portrait maker from London who traveled to India with the East India Company. He met Shuja ud Daulah in Calcutta where he painted his portrait and later accompanied him to Faizabad. He captured many facets of the aristocratic life but his most famous work was portrait of Shuja-ud-Daulah with his heir apparent Asaf ud Daulah. "The nuances of their work are remarkable. The intricacies as in the bejeweled 'bajuband' (armlet), and poise on the face of the two kings is an inspiration," says Vipul Varshney, a city architect. Painters from Delhi such as Mir Kalan Khan also found refuge in Avadh with Mughal aristocracy declining.

What's surely was narcissism in their day today becomes an important record of history, and how people dressed and their environment and so forth.