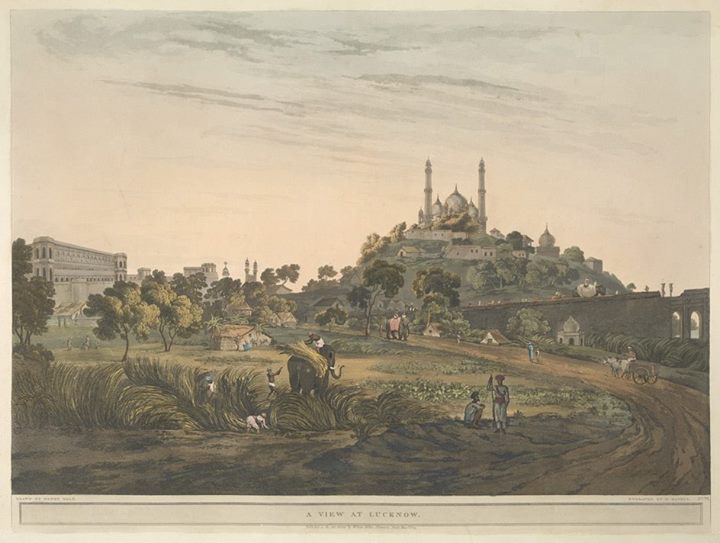 This aquatint was made by Daniell Havell after plate 6 of Henry Salt's 'Twenty Four Views in St. Helena, the Cape, India, Ceylon, the Red Sea, Abyssinia and Egypt'. Lucknow, now the capital of Uttar Pradesh, was formerly the capital of the province of Oudh (Avadh). Situated on the banks of the Gomti, it had a rich cultural tradition. Salt painted this view in the time of Nawab Saadat Ali (1798-1814). George Annesley wrote: "the large building on the left is the Harem of Asof ud Dowlah where his widow now resides ... adjoining the harem, but out of sight, is a very beautiful palace, called the Sungi Dalam, built of stone, coloured red ... the high grass in the foreground is cultivated for elephants, whose principal food it is."

.... and the teeley wali masjid on the hillock, always seen the painting ...never knew the source...thanks fr sharing.

This is the view of Begum Kothi (now Janpath Market) and not Bada Imambara, as photographed by Beato in 1858

Aquatint of Salt didnt get transfered on to popular pottery of the period but Lucknow from Forrest's book and Daniell's oriental scenery can be seen on transferware of 1830s period.

Luchman Tela or Muchee Bhawan - This Fort is adjacent to the stone bridge; it stands on an eminence and is supposed to be the original centre around which the city of Lucknow sprang up. Two centuries have elapsed since it was made into a fort, and it may now be considered as the citadel of Lucknow

Shan e awadh n all such monuments are of heritage value.

Thanks for the images and information.

NGMA Bangalore recently had a talk/exhibition on India transferware. Finally, India waking up to this form of printing ( http://www.deccanchronicle.com/150827/lifestyle-offbeat/article/18th-century-bodhi-tree-was-%E2%80%98tree-hindus%E2%80%99 )