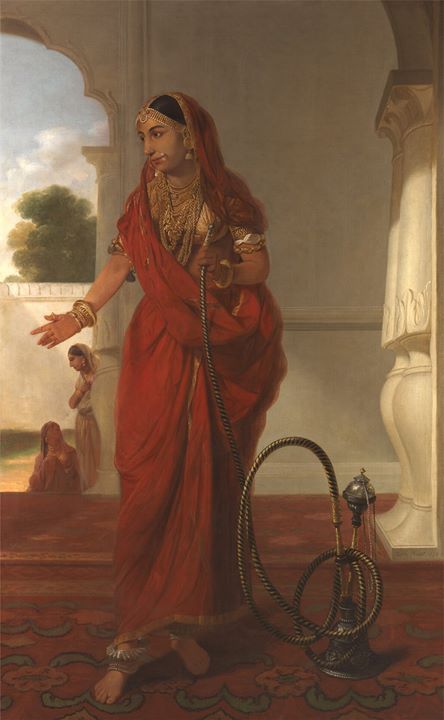 Eliza and Mary Davidson by Tilly Kettle, painted in India, 1784

Descibed in "India and British Portraiture,' by Mildred Archer

Such a trendy woman - smoking in THOSE days?!?

Tilly Kettle (1735–1786) was a portrait painter and the first prominent English portrait painter to operate in India. He was born in London, the son of a coach painter, in a family that had been members of the Brewers' Company of freemen for five generations. He studied drawing with William Shipley in the Strand and first entered professional portraiture in the 1750s. Kettle's first series of portraits appeared in the 1760s. His first surviving painting is a self-portrait from 1760, with his first exhibit with (A. Graves, 1907) the Free Society of Artists in 1761. In 1762, he worked at restoring Robert Streater's ceiling paintings in the Sheldonian Theatre, Oxford, and painted Francis Yarborough, a doctor of Brasenose College, Oxford in 1763. He painted many members of the family of William Legge, 2nd Earl of Dartmouth. In 1764-5, he was active in London and continued exhibiting at the Society of Artists. In 1768, Kettle sailed to India with the British East India Company, landing at Madras (now Chennai), where he remained for two years. There, he painted Lord Pigot and Muhammad Ali Khan twice (once alone and once with five of his sons). He also painted non-portraits, including Dancing Girls (Blacks) in 1772 and a suttee scene in 1776 entitled, The ceremony of a gentoo woman taking leave of her relations and distributing her jewels prior to ascending the funeral pyre of her deceased husband. In 1770 Kettle painted a half-length portrait of 'Sir' Levett Hanson, a peripatetic writer on European knighthood and chivalry originally from Yorkshire. (The portrait is now in the collection of the Bury St Edmunds Manor House Museum.[1]) Kettle moved on to Calcutta (now Kolkata) in 1771 and painted Shuja ud-Daula and Dancing-Girl Holding the Stem of a Hookah. In 1775,he painted George Bogle, Warren Hastings' emissary to Tibet, in Tibetan dress, presenting a ceremonial white scarf to Lobsang Palden Yeshe the 6th Panchen Lama. He also took an Indian mistress and had two daughters by her. He left India in 1776 for London. He married Mary there. She brought a dowry of £5,000, while he put up £3,000 toward a trust fund, so both parties were well established. However, contemporaries indicated that Kettle was manipulated into the marriage for financial reasons. At the same time, he switched his exhibitors to the Royal Academy of Art. He had fewer clients in England than he had before his departure, and his wife was financially imprudent. He had two more daughters by her and one son, named James. He fell into debt, and in 1786 he set out for a return to India. He attempted the voyage overland through Asia. His last portrait was painted in Aleppo, and he died some time later, although where and when is unknown. - Wiki