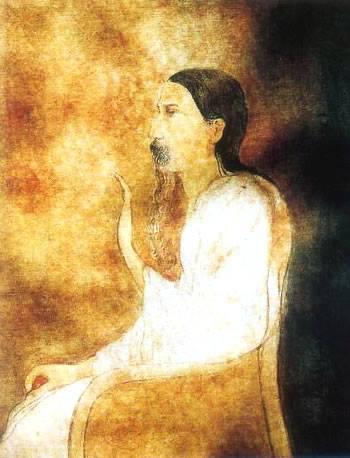 Sri Aurobindo’s youngest brother Barindra Kumar Ghose (5 January 1880 — 18 April 1959) was a noted revolutionary of the Swadeshi movement. Convicted in the Alipore Bomb Trial, he was sentenced to transportation for life in the Andaman Cellular Jail. Soon after his release in January 1920 courtesy an amnesty granted by the Government of India he went to meet Sri Aurobindo in Pondicherry. From August 1923 to December 1929 he remained at Pondicherry under the spiritual aegis of Sri Aurobindo and the Mother.

Though Barindra Kumar is also known for his books in Bengali and English, the fact that he was also a painter is not known to many.

Interesting. Sri Aurobindo mainly compares to Shakespeare & western classics ( Iliad etc). BS Upadhyaya's later book ( India in the time of Kalidasa ) is a fantastic peep into the India of that Gupta period.