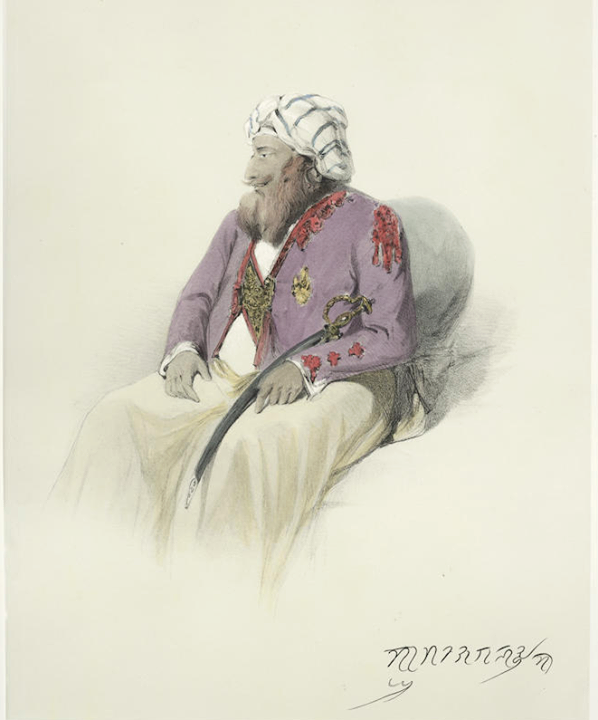 Article:
The Man Who Purchased Kashmir
By R.S.Gull
Published in Kashmir Life - June 2015

It was extraordinary for an illiterate man to evolve into a crafty warlord who worked for others to create his own empire. Promoted by Khalsa Durbar, he allied with the East India Company, and eventually raised loans to purchase Kashmir in installments. But Gulab Singh, the ruthlessly ambitious maverick who founded J&K state, shall remain an enigma throughout history for cobbling a heterogenic state that defies logic but still exists 157 years after his death.

Manhattan Indians’ sold New York City to Dutch settlers in 1614 for about 24 dollars. In 1867 even America purchases ‘Russian America’ for 7.2 million dollars from Russia and renamed it Alaska. But the sale of Kashmir by East India Company in March 1846 continues to be the most discussed sale of a nation ever. Nearly 170 years later, this Rs 75 lakh purchase still haunts Kashmir nation’s core conscience. Key to its tensions and instability, Kashmir is still groping to find a way to stop devouring generations.
The March 16, 1846 Treaty that sold Kashmir, “their fields, crops, streams, even the peasants…” – as poet Iqbal lamented later, was signed more than 500 kms away from Srinagar, in Amritsar. “On this occasion Maharaja Gulab Singh stood up and with joined hands, expressed his gratitude to the British Viceroy – adding, without however, any ironical meaning,” recorded Captain Joseph Davey Cunningham, an East India Company official, in his celebrate History of Sikhs. “That he was indeed the zar-kharid or gold-boughten slave!”

Plate 1 from "Recollections of India. Part 2. Kashmir and the Alpine Punjab" by James Duffield Harding (1797-1863) after Charles Stewart Hardinge (1822-1894), the eldest son of the first Viscount Hardinge, the Governor General. This depicts Maharaja Gulab Singh (died 1857) who started his career as a soldier under Maharaja Ranjit Singh (1792-1839) and rose to a prominent position at his court. During the first Sikh war he forged an alliance with the British and defeated Sikh groups vying for power after Ranjit Singh's death. After signing the Treaty of Amritsar, 1846 he became Maharaja and bought the territories of Jammu and Kashmir which occupied an important position in the political geography of India. The British needed a friendly power by which the Northwest frontier could be defended against the Afghans.

A Collection of Treaties, Engagements, and Sunnuds -Relating to India and Neighbouring Countries: Compiled by Atchisons It was a Sunnud state

It is like I take over your home and sell your belongings and your house to you and get some money for it. That is what colonial thugs did.

Let us buy the rest of it to settle the disputes!

Rs 75 lacs were raised from each dogra family in jammu. it was one time payment for Kashmir valley only.. Gilgit, HunzaNagar,Baltistan,Chitral, Skardu, and ladakh have already been conquered by Gen. Zorawar Singh of Dogra Raj.

Why such hue and cry over the purchase of K A S H M I R ? Kashmir was not the only native state riyasat that was established in that manner. If you look into the history of those 562 native states that got merged in india, there is some or the other kind of story involved.Heart of the matter is this, things were made so very complicated with a sole aim to BENEFIT certain family that too in very brazen manner.Which turned Kashmir into hell,but certainly, ZANNAT for someone so special.

Not Treaty , Engagements, or Grant , as per Atchisons it was a -'Sunnud' State - Bona fide purchaser. America bought 'Alaska' from Czar Russia

You don't buy what is already yours for 5000 years

One of the greatest Gadaars (traitor) in history