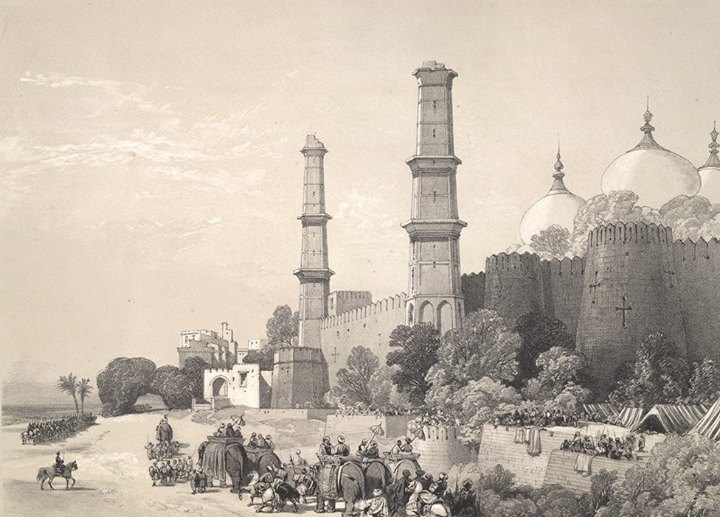 Entry into Lahore from the Parade Ground, Panjab - 1847

Plate 9 from "Recollections of India. Part 1. British India and the Punjab" by James Duffield Harding (1797-1863) after Charles Stewart Hardinge (1822-1894), the eldest son of the first Viscount Hardinge, the Governor General. This depicts the entry of the child Maharajah Duleep Singh to his palace in Lahore accompanied by an escort of British troops commanded by Brigadier Cureton, following the First Anglo-Sikh War (1845-46). Here, Maharajah Duleep Singh was forced to renounce his sovereign rights to the British Government under Governor-General Hardinge. The British installed their ally Gulab Singh, as Maharajah of these territories.

this is etching is a very close to reality of Lahore , before any major intervention took place to the walls of the walled city of Lahore , if you notice the walls were around the entire city with bastions

Ranjit Singh's cremation ground, outside his Palace in Lahore where some of his wives committed 'Sati' on his chita -pier. Honigberger. Photo by James Kerr 1875

Is this the "Delhi Gate" side of Lahore ? That faces the " Lahore Gate" side of Delhi's Red Fort. Delhi Gate in Lahore still remains in a bazaar area, right ?