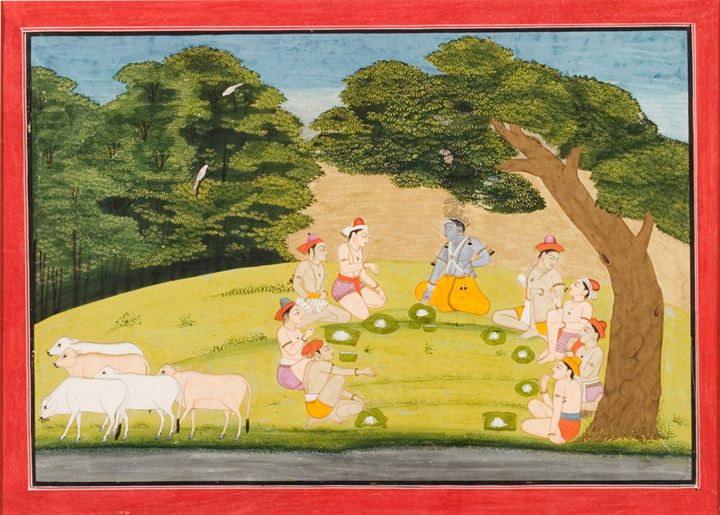 Lallulal (1763 - 1825) was one of the Indian scholars associated with the College of Fort William in early-nineteenth century Calcutta. The purpose of the College was to train young officers of the East India Company and to prepare books that could be used to teach Indian languages. As part of this mission, Premsāgar, or The Ocean of Love, was one of the first books to be published in khari boli, the dialect of Hindi which is the basis for the standard Hindi used today.

The text is based on the tenth book of the Bhāgavata purāṇa, which describes Lord Krishna's childhood in the fields around Vrindavan on the banks of the Yamuna River not far from Agra. Some of the best-loved stories about Krishna have to do with his escapades as a young boy in a cowherding community (though of course we are to keep in mind that he is in fact divine and so quite a special child). Notably, he steals butter and makes all the cow-herding girls (gopis) fall in love with him. The event described in the selection here is the famous episode in which Krishna steals the clothes of the bathing gopīs and forces them to come out of the water naked. It is a comical story but of course also allegorically enjoins the believer not to feel shame in the presence of God.

Some words and expressions in the text will be unfamiliar to the student because they are derived from the Braj dialect of Hindi rather than from khari boli. Braj is a literary dialect that is associated with stories about the young Krishna in Vrindavan.

Image:
Krishna and the Cowherds on a Picnic, Folio from a Bhagavata Purana
India, Himachal Pradesh, Basohli
1760-1765
Opaque watercolor and gold on paper

Thank you Bibhash Gupta - for suggesting this book.