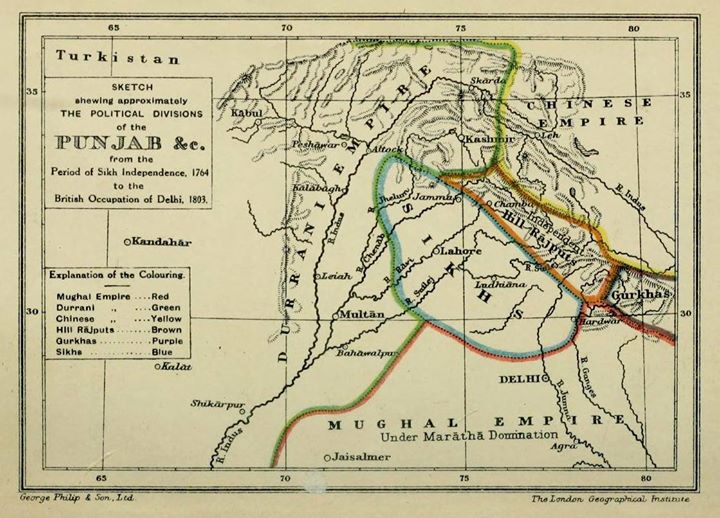 Digital Rare Book:
A history of the Sikhs from the origin of the nation to the battles of the Sutlej
By Joseph Davey Cunningham (1812-1851)
Published by Humphrey Milford, London - 1918

Very interesting. Ladakh is shown as a part of the 'Chinese Empire'

If as as a serious student of History you have a chance to read this title please first read the FIRST EDITION . CUNNINGHAM'S History of the Sikhs is a work which no serious student of Indian history can do with- out. Cunningham was never a dilettante; on the other hand he was an expert and an authority. He brought to bear on the subject an unbiased mind, a fastidious fondness for accuracy as well as consummate erudi- tion. No bias warps his judgement, no profitless profu- sion mars the beauty of his style, no lurking ignorance interrupts the fulness of the narrative. The author had lived among the Sikhs for a period of eight years during a very important portion of their history. And it is to this fact that the genesis of his magnum opus is to be traced. But — strange as it may appear — the author's un- flinching adherence to truth at first brought him only degradation and disgrace. The circumstances have been explained by Malleson thus: "The work (History of the Sikhs) appeared in 1849. Extremely well writeen, giving the fullest and the most accurate details of events; the book possessed one quality which, in the view of the Governor-General of the day, the Marquis of Dalhousie, rendered the publication of it a crime. It told the who^e truth — the unpalatable truth, regarding the first Sikh War; it exposed the real strength of the Sikh army; the con- duct of, and the negotiations with, the Sikh chiefs. "The book, if unnoticed by high authority, would have injured no one. The Punjab had been annexed, or was in the process of annexation, when it appeared. But a despotic Government cannot endure truths which seem to reflect on the justice of its policy. Look- ing at the policy of annexation from the basis of iv AN APPRECIATION Cunningham's book, that policy v/as undoubtedly un- just. Cunningham's book would be widely read, and would influence the general verdict. . . . That an officer holding a high political office should write a book which, by the facts disclosed in it, reflected, however indirectly, t>n his Dalhousie's policy, was not to be en- dured. With one stroke of the pen, then, he removed Cunningham from his appointment at Bhopal. Cun- ningham, stunned by the blow, entirely unexpected, died of a broken heart!" Truth, however, has triumphed ultimately as it has a way of doing. Lord Dalhousie could crush Cun- ningham, but he could not crush his work. Posterity hastened not only to remove from the brow of this conscientious and faithful historian the scars of the stigma which Dalhousie had tried l.o brand on it, but also to adorn it with the laurel crown which is the victor's just reward. Cunningham's place in the Valhalla of historians is now secure.

can you tell me what is written about hill rajputs