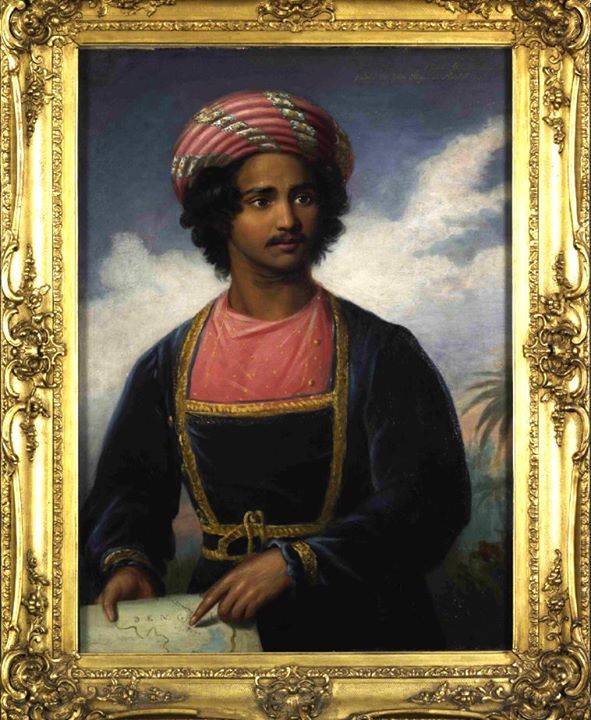 This portrait is of Raja Ram Roy, the first non-European to be employed within the British Civil Service. When he arrived in Europe in 1831, it was never his intention to work in London. However, circumstances altered the fortunes of this privileged young Bengali man. From 1835 to 1838 he worked in the Board of Control, a government office which was set up to regulate the East India Company’s activities.

He came to Europe as a companion to his father, Ram Mohan Roy (the famous Bengali social reformer), who was touring Europe as an envoy of the Mughal King of Delhi. On September 27, 1833 Ram Mohan Roy died just outside of Bristol. It appears that Raja Ram Roy received an allowance of ‘Rs 3750 per month’ from the King of Delhi following his father’s death. However it is hard to say how long these payments continued. (IOR/E/4/781, p.511-551). Whatever his circumstances, Raja Ram Roy remained in England for another 5 years before returning to India.

Raja Ram Roy’s employment at the Board of Control was controversial at the time because he was not European. However, in parliament, both Whigs and Liberals supported his employment, which was seen as a learning opportunity for the young man, who could return to India and disseminate new insight into the running of public business to his Indian peers (Ballhatchet 1957).

In February 1838 Raja Ram Roy ‘expressed a wish to return to India’. He was paid up to 4 August, 1838, and according to the Board of Control’s minutes, was given a ‘Donation of £100 in consideration of his diligence in the discharge of his duties, and the circumstances under which he accompanied his Father Ram Mohun Roy to this country’(IOR/F/1/6, p.460-462, 512-513) . By 1840 he was back in India, but it appears that he died soon after his return.

What a weakling to look at considering he was Ram Mohan Roy's son. However thanks for the info. We always thought of Satyendra Nath Tagore as the first Indian Civil Servant

Re: " We always thought of Satyendra Nath Tagore as the first Indian Civil Servant " The article above is referring to Raja Ram Roy's employment with the British *domestic* Civil Service in the 1830s (i.e. in the UK itself ) although his exact title and the terminology is a little bit of a grey area in this case – as the ‘home’ civil service was not formally established or constituted until the mid-1850s. Satyendranath Tagore was indeed the first ' non-European ' to join the Indian Civil Service – or rather he was the first ' non-European ' to pass the notoriously difficult ICS entrance examination in 1862 – a result that enabled him to take a seat within the innermost sanctum of the otherwise highly elitist ICS. Although it should be pointed out, of course, that tens of thousands of ' non-Europeans ' had always worked within the government machinery of the East India Company for generations prior to Tagore's groundbreaking appointment - just not within the highest echelons of the EIC management structure.

Thanks Julian Craig,for this out of the way information

Raja Ram Mohan Roy died under very pathetic circumstances....his finances and sponsorships were stopped, he had to stay with friends...and did not have money to return back to calcutta...Raja Ram Mohan Roy died on 27 September 1833 in Bristol because of meningitis.....his memorial was in a dilapidated state till renovated by a indian businessman..possibly Lord Swaraj Paul(i may be wrong)....and i doubt the theory of Raja Ram Mohan Roy being a Civil Servant...In 1830 Ram Mohan Roy travelled to the United Kingdom as an ambassador of the Mughal Empire to ensure that the Lord Bentick's regulation banning the practice of Sati was not overturned....and not as a Civil Servant....