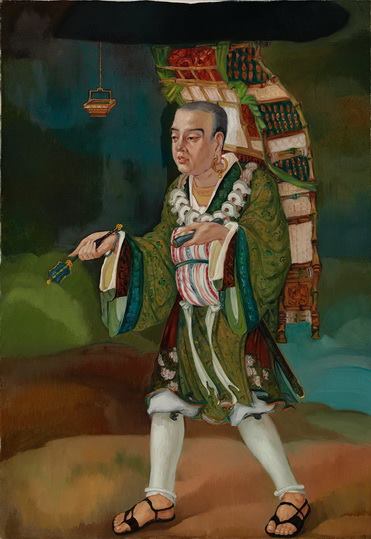 In the year 629, the year after the arrival of Muhammad's envoys at Canton and thirty odd years after the landing of Pope Gregory's missionaries in England, a certain learned and devout Buddhist named Yuan Chwang stated out from Sian-fu (Singan), Tai-tsung's capital, upon a great journey to India. He was away sixteen years, he returned in 645, and he wrote an account of his travels which is treasured as a Chinese classic. One or two points about his experiences are to be noted here because they contribute to our general review of the state of the world in the seventh century A. D.

Yuan Chwang was as eager for marvels and as credulous as Herodotus, and without the latter writer's fine sense of history, he could never pass a monument or ruin without learning some fabulous story about it (Chinese ideas of the dignity of literature perhaps prevented him from telling us much detail of how he travelled, who were his attendants) how he was lodged, or what he ate and how he paid his expenses details precious to the historian; nevertheless, he gives us a series of illuminating flashes upon China, Central Asia, and India in the period now under consideration.

His journey was an enormous one. He went and came back by way of the Pamirs. He went by the northern route, crossing the desert of Gobi, passing along the southern slopes of the Thien Shan, skirting the great deep blue lake of Issik Kul, and so to Tashkend and Samarkand, and than mere or less in the footsteps of Alexander the Great southward to the Khyber Pass and Peshawur. He returned by the south-ern route, crossing the Pamirs from Afghanistan to Kashgar, and so along the line of retreat the Yue-Chi had followed in the reverse direction seven centuries before, and by Yarkand, along the slopes of the Kuen Lun to rejoin his former route near the desert end of the Great Wall. Each route involved some hard mountaineering. His journeyings in India are untraceable; he was there fourteen years, and he went all over the peninsula from Nepal to Ceylon.

At that time there was an imperial edict forbidding foreign travel, so that Yuan Chwang started from Sian-fu like an escaping criminal. There was a pursuit to prevent him carrying out his project. How he bought a lean red-coloured horse that knew the desert paths from a strange grey-beard, how he dodged a frontier guard-house with the help of a "foreign person" who made him a bridge of brushwood lower down the river, how he crossed the desert guided by the bones of men and cattle, how he saw a mirage, and how twice he narrowly escaped being shot by arrows when he was getting water near the watch-towers on the desert track, the reader will find in the Life. He lost his way in the desert of Gobi, and for four nights and five days he had no water; when he was in the mountains among the glaciers, twelve of his party were frozen to death. All this is in the Life; he tells little of it in his own account of his travels.

He shows us the Turks, this new development of the Hun tradition, in possession not only of what is now Turkestan, but all along the northern route. He mentions many cities and considerable cultivation. He is entertained by various rulers, allies of, or more or less nominally tributaries to, China, and among others by the Khan of the Turks, a magnificent person in green satin, with his long hair tied with silk.

"The gold embroidery of this grand tent shone with a dazzling splendour; the ministers of the presence in attendance sat on mats in long rows on either side all dressed in magnificent brocade robes, while the rest of the retinue on duty stood behind. You saw that although it was a case of a frontier ruler, yet there was an air of distinction and elegance. The Khan came out from his tent about thirty paces to meet Yuan Chwang, who, after a courteous greeting, entered the tent. After a short interval envoys from China and Kao-chang were admitted and presented their despatches and credentials, which the Khan perused. He was much elated, and caused the envoys to be seated, then he ordered wine and music for himself and them and grape-syrup for the pilgrim. Hereupon all pledged each other, and the filling and draining of the wine cups made a din and bustle, while the mingled music of various instruments rose loud: although the airs were the popular strains of foreigners, yet they pleased the sense and exhilarated the mental faculties. After a little, piles of roasted beef and mutton were served for the others, and lawful food, such as cakes, milk, candy, honey, and grapes, for the pilgrim. After the entertainment, grape-syrup was again served, and the Khan invited Yuan Chwang to improve the occasion, whereupon the pilgrim expounded the doctrines of the 'ten virtues,' compassion for animal life, and the paramitas and emancipation. The Khan, raising his hands, bowed, and gladly believed and accepted the teaching."

Yuan Chwang's account of Samarkand is of a large and prosperous city, "a great commercial entrepôt, the country about it very fertile, abounding in trees and flowers and yielding many fine horses. Its inhabitants were skilful craftsmen, smart and energetic." At that time we must remember there was hardly such a thing as a town in Anglo-Saxon England.

As his narrative approached his experiences in India, however, the pious and learned pilgrim in Yuan Chwang got the better of the traveller, and the book becomes congested with monstrous stories of incredible miracles. Nevertheless, we get an impression of houses, clothing, and the like, closely resembling those of the India of to-day. Then, as now, the kaleidoscopic variety of an Indian crowd contrasted with the blue uniformity of the multitude in China. In the time of Buddha it is doubtful if there were reading and writing in India ; now reading and writing were quite common accomplishments. Yuan Chwang gives an interesting account of a great Buddhist university at Nalanda, where ruins have quite recently been discovered and excavated. Nalanda and Taxilla seem to have been considerable educational centres as early as the opening of the schools of Athens. The caste system Yuan Chwang found fully established in spite of Buddha, and the Brahmins were now altogether in the ascendant. He names the four main castes we have mentioned in Chap. 'viii, § 6 (q. v.), but his account of their functions is rather different, The Sudras, he says, were the tillers of the soil. Indian writers say that their inflation was to wait upon the three "twice born" castes above them.

But, as we have already intimated, Yuan Chwang's account of Indian realities is swamped by his, accumulation of legends and pious inventions. For these he had come, and in these he rejoiced. The rest, as we shall see, was a task that had been set bun. The faith of Buddha which in the days of Atoka, and even so late as Kaniska, was still pure enough to be a noble inspiration, we now discover absolutely lost in a wilderness of preposterous rubbish, a philosophy of endless Buddhas, tales of manifestations and marvels like a Chris mas pantomime, immaculate conceptions by six-tusked elephants, charitable princes giving themselves up to be eaten by starving tigresses, temples built over a sacred nail-paring, and the like. We cannot give such aeries here; if the reader lies that sort of thing, he must go to the publications the Royal Asiatic Society or the India Society, where he will find a delirium of such imaginations. And in competition with this Buddhism, intellectually undermined as it now was and smothered in gilded decoration, Brahminism was everywhere gaining ground again, as Yuan Chwang notes with regret.

I hv read it

Hueng Tsang (Xuanzang ) fully ordained a monk in 622, . The myriad contradictions and discrepancies in the texts at that time prompted Xuanzang to decide to go to India and study in the cradle of Buddhism. He left his brother and returned to Chang'an to study foreign languages and to continue his study of Buddhism. He mastered Sanskrit in 626, and studied Tocharian. During this time, Xuanzang became interested in the metaphysical Yoga, school of Buddhism.

Just what I wanted to get hold of!