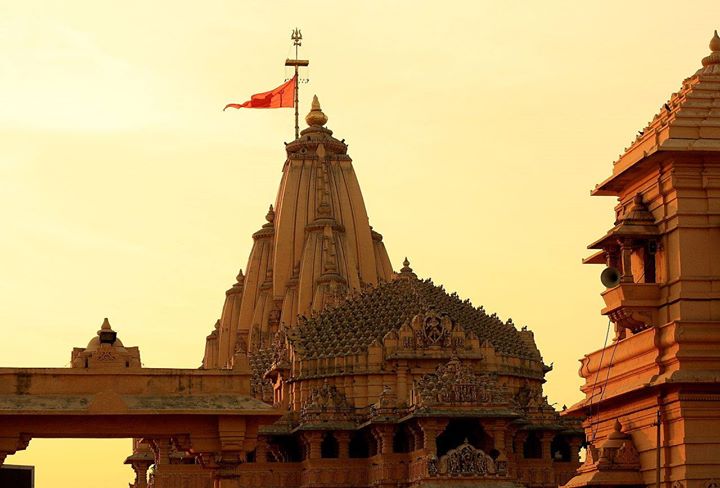 History of the Somnath Temple, Gujarat

The Someshwar Mahadev temple stands tall among the temples of India. The construction of the present temple in Junagadh district began in 1947. It is the seventh temple built to commemorate the glory of Lord Somnath who is said to have known as Bhairaveshwar in the Satya Yug, Shravanikeshwar in Treta Yug and Shrigaleshwar in Dwapar Yug.

The following extract is from “Wonders of Things Created, and marvels of Things Existing” by Asaru-L- Bilad, a 13th century Arab geographer. It contains the following description of Somnath temple and its destruction: The following is a long quotation:

“Somnath: celebrated city of India, situated on the shore of the sea, and washed by its waves. Among the wonders of that place was the temple in which was placed the idol called Somnath. This idol was in the middle of the temple without anything to support it from below, or to suspend it from above. It was held in the highest honor among the Hindus, and whoever beheld it floating in the air was struck with amazement, whether he was a Musulman or an infidel. The Hindus used to go on pilgrimage to it whenever there was an eclipse of the moon, and would then assemble there to the number of more than a hundred thousand. They believed that the souls of men used to meet there after separation from the body, and that the idol used to incorporate them at its pleasure in other bodies, in accordance with their doctrine of transmigration. “The ebb and flow of the tide was considered to be the worship paid to the idol by the sea. Everything of the most precious was brought there as offerings, and the temple was endowed with more than 10,000 villages. There is a river (the Ganges) which is held sacred, between which and Somnat the distance is 200 parasangs. They used to bring the water of this river to Somnath every day, and wash the temple with it. A thousand brahmins were employed in worshipping the idol and attending on the visitors, and 500 damsels sung and danced at the door–all these were maintained upon the endowments of the temple. The edifice was built upon fifty-six pillars of teak, covered with lead. The shrine of the idol was dark. hut was lighted by jeweled chandeliers of great value. Near it was a chain of gold weighing 200 mans. When a portion (watch) of the night closed, this chain used to be shaken like bells to rouse a fresh lot of Brahmins to perform worship. “When the Sultan Yaminu-d Daula Mahmud Bin Subuktigin went to wage religious war against India, he made great efforts to capture and destroy Somnat, in the hope that the Hindus would then become Muhammadans. He arrived there in the middle of Zi-l k’ada, 416 A.H. (December, 1025 A.D.). “The king looked upon the idol with wonder, and gave orders for the seizing of the spoil, and the appropriation of the treasures. There were many idols of gold and silver and vessels set with jewels, all of which had been sent there by the greatest personages in India. The value of the things found in the temples of the idols exceeded twenty thousand thousand dinars.

(Elliot’s footnote: The enormous treasures found at Somnat have been a theme of wonder for all who have written on that conquest.) “When the king asked his companions what they had to say about the marvel of the idol, and of its staying in the air without prop or support, several maintained that it was upheld by some hidden support. The king directed a person to go and feel all around and above and below it with a spear, which he did, but met with no obstacle. One of the attendants then stated his opinion that the canopy was made of loadstone, and the idol of iron, and that the ingenious builder had skillfully contrived that the magnet should not exercise a greater force on anyone side-hence the idol was suspended in the middle. Some coincided, others differed. Permission was obtained from the Sultan to remove some stones from the top of the canopy to settle the point. When two stones were removed from the summit the idol swerved on one side, when more were taken away it inclined still further, until at last it rested on the ground.”

According to the legends, Soma, the moon God built the temple in gold, Ravan in silver, Krishna in wood and king Bhimdev of Anhilwad in stone. Soma constructed the temple as a gesture after Lord Shiva cured him of his illness. This illness was caused by his father-in-law Daksha Prajapati's curse. Daksha cursed him to wane as he was infatuated with Rohini and was neglecting the other 26 wives, all 26 of whom were the daughters of Prajapati. It is said that Brahma advised him to build the temple in honour of Shiva.
The present temple is the seventh temple reconstructed on the original site. The first temple of Somnath is said to have existed before the beginning of the common era. The second temple, built by the Yadava kings of Vallabhi in Gujarat, replaced the first one on the same site around 649.

In 725 Junayad, the Arab governor of Sind, sent his armies to destroy the second temple. The Pratihara king Nagabhata II constructed the third temple in 815, a large structure of red sandstone.

In 1024, Mahmud Ghazni raided the temple from across the Thar Desert. Ghazni was challenged by the king, Ghogha Rana, who at the ripe age of 90, sacrificed his own clan fighting against Ghazni.

The fourth temple was built by the Paramara King Bhoj of Malwa and the Solanki king Bhima of Gujarat (Anhilwara) or Patan between 1026 and1042. The wooden structure was replaced by Kumar pal (r.1143-72), who built the temple of stone. [5].

The temple was razed in 1297 when the Sultanate of Delhi conquered Gujarat, and again in 1394. The Mughal Emperor Aurangzeb destroyed the temple again in 1706.[6]

Sardar Vallabhbhai Patel was instrumental in building this latest version and the original temple was deconstructed and now lies divided in two museums in Somnath. Worth visiting both museums to see the last remnants of the beautifully carved stone sculptures, pillars and columns.

So sad that in the name or Islam they have destroyed so much in the world and still doing it. I just got done watching a BBC documentary on Iraqi historical monuments treated by ISIS. Nothing has changes for them in all these years?

Is the Shiv linga still there or taken or destroyed?

Oh Aurangzeb it seems put the Dome. But we all know he is so innocent.

I was there in 2014. September, during the monsoon. The new structure is very nice. The location by the ocean is very powerful.

the main person who renovated somnath was in fact k.m.munshi and jam sahib digvijaysinhji of jamnagar.sardar patel helped them as a representative of the indian government.